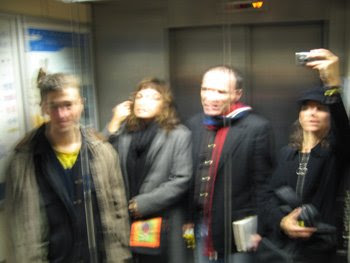 An excellent musical change of pace last evening as I went to Issue Project Room to hear, not another eai ensemble, but the Wingdale Community Singers, an....avant folk group for lack of a better pigeonhole. Been meaning to hear them for quite a while as one member is my friend Nina Katchadourian (vocals, guitar, accordion, recorder, percussion); finally a convenient, for me, date occurred and there I went. The rest of the group is Hannah Marcus (vocals, guitar, piano, violin), Rick Moody--yes, the writer--(vocals, guitar, piano) and normally David Grubbs, though unfortunately he couldn't make last night's show and was replaced by Randy Polumbo on guitar and dobro. They were augmented for this occasion by bassist Elissa Moser and, on a couple of pieces, cellist Tiana Kennedy.

I guess you could reference The Roches somewhat, given the slightly warped but traditional song forms (almost all slow and moody) and the wry humor that abounded, though the Wingdales verbal sensitivities might be said to lie in more of a post-Laurie Anderson zone with a marked leaning toward country blues. Whatever the case, they're totally enjoyable both musically and lyrically, with a relaxed demeanor, lovely vocal harmonies and a nice habit of being able to generalize from the particular into often very moving songs. One favorite began with wishing that there was a wider ocean available to separate the singer from an ex-lover, moving on to a desire for a planet-wide catastrophe involving the asteroid belt that might do the job and, finally, opting for a situation where there were ten dimensions and "you were in the other six."

It was one of those rare events where I could, without too much trepidation, invite friends and all three, Carol, Anne & her husband Dan, thoroughly enjoyed it.

Yep, that fellow. Interesting convergence of musical geekitude here. I met Grubbs once about 4-5 years ago, with Keith. Grubbs was working on a book idea involving interviews with various musicians though I don't think it ever eventuated. I once brought Gastr del Sol's "Dry Bones in the Valley" (I think I'm remembering the title correctly) to Record Club. Nina, of course, is in Record Club and Moody attended one of our get-togethers a few years back, though it was one I didn't make. He was psyched enough by the general idea to start his own in Brooklyn which is still ongoing.

loved their first record when it came out (they were a trio of Moody/Grubbs/Marcus then), beautiful urban folk with great vocals. Nice to see they're still around (and expanding)