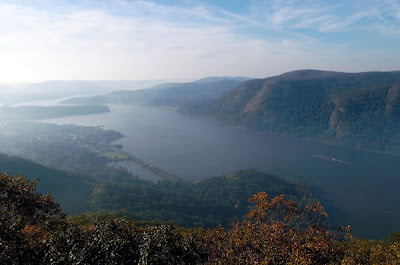 I love train rides. I can sit at a train window and watch the passing scenes for hours, whether beautiful landscapes or the backyards of inner cities. The ride from Grand Central to Poughkeepsie is one I've taken countless times but never grow tired of. Did so again on Thursday. From the three or so miles of underground mystery before you emerge at 97th St. (dim lights seen hundreds of feet off into the dark--there's an enormous web of tunnels undergirding the east side of Manhattan) through Spanish Harlem, across the Harlem river into the Bronx (chop shops, banks of weeds, the basaltic rise of the Palisades across the Hudson), the landscape getting "greener" with surprising rapidity as you go through obscure little towns like Philipse Manor, Scarborough--through Sing Sing Prison (largely--totally?--abandoned, the watchtowers and barbed wire still there--for much of my youth I thought references I'd hear in movies and such were about some mythical ur-Prison; didn't know it actually existed!), the trainyards at Croton-on-Hudson, Indian Point nuclear plant, West Point across the river, imposing in a hyper-military way, Bannerman's Castle, 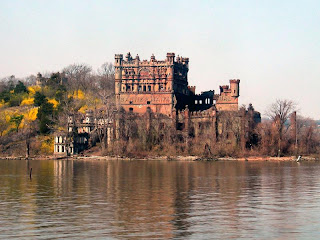 an object of much mystery as a youngster, the massive Storm King Mountain, it's scarred sides the result of its having been used as a "target" of cannons during the Civil War, their manufacture having taken place in Cold Spring across the river, the large number of abandoned factories and other buildings of obscure purpose, their hollow husks weathering along the banks for decades, only gradually falling to construction of fashionable townhouses--it takes a while even this close to NYC, some 40-75 miles, the ruins dotting the shore right up to Poughkeepsie and, I imagine, well beyond. 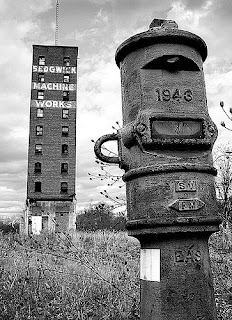 Beautiful trip, beautiful area. I'll probably do it a few dozen more times before I'm through.

[Edit: Oh yeah, almost forgot. At Thanksgiving dinner, I found out that my aunt Irene, a stunner in her youth (still, actually) dated Harry Belafonte for a year or so, I guess around 1950, shortly before he made it big, but after having shared the stage with Miles, Roach, etc. Coolio.] 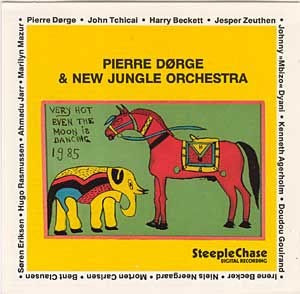 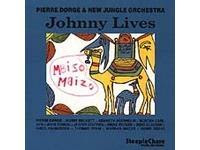 Listened to my two Pierre Droge LPs this morning. I think I came to him in the mid 80s hoping for something along the lines of Bengt Berger, that is, a Northern European making imaginative use of African melodies and structures. Dorge's approach, I think, is more aligning early jazz (20s Ellington, for example) with its African roots. He succeeds on occasion (although coming nowhere near the heights of Berger's "Bitter Funeral Beer") but more often a plodding rhythmic sense drags down the pieces. He does have the great John Tchicai along for the ride as well as Harry Beckett and, on the earlier recording, Dyani (on the latter, an early appearance on record by Hamid Drake) and both albums have their moments, but overall they're somewhat forgettable. Dorge has a unique and beautiful tone on guitar, I'll grant. Picked up a CD later on, Live in Chicago, but lost interest rather quickly. I've no idea what he's up to these days. 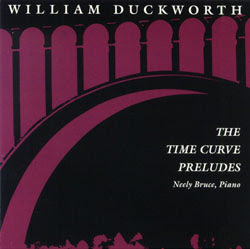 This one's an interesting bird, a relatively successful, early-ish (1983) attempt to meld minimalism with a kind of Satie-esque tonality, in some ways not dissimilar to Ron Geesin's Patruns from the mid 70s, though less pyrotechnic. Never got around to investigating any of Duckworth's other music, though; suggestions welcome.

Thanks for the notes on your train journey Brian. I completely agree that railway journeys and particularly lengthy ones are the best form of transport. I only wish the journey to and from London (which I've just completed for the sixth time in eight days) was as beautiful as yours looks. I spent the afternoon with Mr and Mrs Rowe by the way, both on good form.

As for the town of Scarborough... I only hope it doesn't follow after the town that I assume gave it its name...!