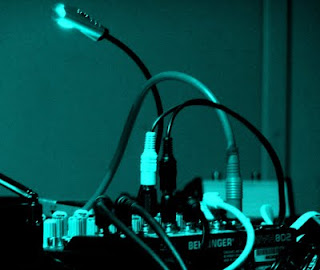 Not to leave out mention of other shows, including a superb duo improv from Keith and Radu, but last evening's solo Rowe performance is, at the moment, blotting out all else.

You knew it had the potential to be exceptional, occurring on the 10th anniversary of 9/11 (and the 38th of 9/11/73 as well) in NYC. One of his prime topics of musical conversation over the previous week had been Dvorak's "Piano Quintet" (a recording with Clifford Curzon at the piano) and he had dropped a hint or two that it might figure in his set. As it happened, that was the "theme", threading its way through the performance, its romantic, evocative melodies beset by all manner of reality-reminders, Rowe-generated and otherwise.

He later explained that the Dvorak, for him, was about memories, specifically cherished memories from long ago, how wonderful things were then. Not hard to make a connection with US self-image vs. the past ten years. The set was as harsh, overall, as anything I've heard from him, in a similar emotional range as the duo with Burkhard Beins (ErstLive 001). He made frequent use of the scrubbing coils on guitar strings as well as his trusty nail file, allowing the Dvorak to filter up (and linger for a good while) before burying it in carnage, back and forth. The other principal element was radio and he managed, in typical fashion, a couple of extraordinarily serendipitous captures, including EMF's "Unbelievable" (the chorus, "You're unbelievable" was almost too apropos!) and a talk radio program during a 9/11 conspiratorial discussion.

Better still...The Stone, as many know, is on the ground floor on the corner of Avenue C and 2nd St and the sounds of the outside world stream into the space with little loss of volume. Not too much of a bother during a standard free jazz squall perhaps but something quieter practitioners need take not of, if only to ignore and subsume into their work. About midway through Keith's set, a voice was heard (female, I'd guess middle-aged, possibly latina, quite likely inebriated) saying, "No! No! No! NO! NO! NO!! NO!" etc. Excellent enough in context, but when Don, who was manning the door, went out to ask her to please be quiet, that there was a performance going on, she exploded, "Fuck you! Fuck your performance! Fuck you!" and continued in that vein for a minute or two. The analogy between this and US attitude toward the world, especially in the last decade, was all too delicious.

The Dvorak continued to do battle with the drones, the violence, the rudeness, the narcissism, the absurd sense of self-worth and obliviousness, eventually fading away.

that is certainly the plan at this point, re ErstLive, stunning set that reminded me of being in the room for the EL001/EL007 sets.

Radu was right by the door, and he said as her friends dragged her across the street and away, she kept screaming, and so there was a really nice fadeout on the "FUCK YOU! FUCK YOUR PERFORMANCE!" as she gradually got farther away.

It was the best live performance I have ever heard. Keith did such an amazing job of mixing together all these different elements into an amazing work of art. It was a privilege to be there.

I'm glad I inadvertently made a positive contribution to the performance. Jon, will I get a credit on the ErstLive CD? : ) She was in fact very inebriated. Thankfully her two friends pulled her away after I politely asked them if they could move their conversation across the street. I waited until she was a good distance away before reentering the club. Hence the "Fuck You!" fade out.

I agree, it was a wonderful performance by Keith. For me, the ending was particularly poignant.

well, I had to miss something, and it seems like I did!