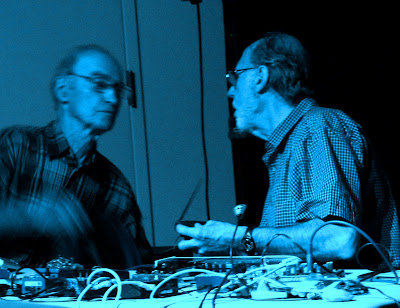 Jason Lescalleet led off playing solo last night, speaking to the audience beforehand very movingly, describing how this weekend encompassed both the anniversary of his father's death (if you haven't heard Jason's "The Pilgrim", please do so) and the occasion of his son's moving out of the house. He began the set with a low buzz that sounded like a miniature mic had been inserted in the abdomen of a bumblebee; it slowly increased in both volume and complexity before beautifully shattering into complex shards well up there in decibel level. For the remainder, he veered back and forth from quieter passages, with low rumblings from his loosely strung tapes, to piercingly loud ones, at the edge of aural pain (likely past it for some), extremely sharp-edged. It was unsettling, sometimes disjointed, but largely effective. Towards the end, he built up a very dense drone within which I could swear I was hearing some deeply buried gospel-y piano. Sure enough, several minutes later, the dronage began to evaporate and the song loop--I've no idea what; my first impression was something along the lines of Leon Russell, but that's apparently not the case--came to the for, resolutely, iterating until it faded out minutes later. A lovely and moving summing up.

The highly anticipated duo of Christian Wolff and Keith Rowe was next, only the second time they'd played in that formation, though they've often worked with the Merce Cunningham troupe as part of a trio with Takehisa Kosugi. Wolff had an electric guitar lying flat on the table with sundry small instruments and made use of the piano as well. They began, at leas on Rowe's part, by playing Wolff's "Stones", with Wolff apparently playing bits and pieces of other compositions of his throughout. To the listener, however, it felt like an improvisation and, to these ears, some of Wolff's contributions seemed perfunctory or routine although, listened to from a different angle, there was an appealing awkwardness that one doesn't encounter often in this area (I easily defer to Wolff, assuming there were ore ideas percolating there than I'm aware of). Hard to say, except that it was discomforting. Given that Rowe had been talking much of the last few days (and had mentioned in an article written this week by Kurt Gottschalk in New York City Jazz Record) about failure and how he hoped his audience understood how much more valuable a failed performance is than a "wow" one, well, they might have succeeded by thereby failing...in any case, however unfortunately, they succeeded brilliantly in the last ten or so minutes, Rowe maintaining the varying hum he'd been using almost throughout (in addition to some gorgeously modulated radio) and Wolff ceasing the wandering from item to item, resting his left arm on his guitar and being content with whatever hum that generated. Crystalline and beautiful. Very happy to have witnessed this meeting.
Posted by Brian Olewnick at 9/05/2011 04:41:00 PM

I actually asked Jason when he played in my series, and it turns out, it was just a cover created all live.