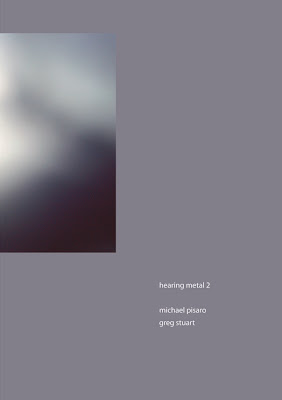 Giving a blow by blow account of Pisaro's music is becoming increasingly absurd. The pieces really demand to be considered as a totality (even as some more recent works are more segmented than in years past) and their vastness, both in simple length and, more, in their enormous depth, make normal descriptors seem hopelessly futile.

"Hearing Metal 2" is gorgeous. Its first section wavers in episodes that feel like shutters opening and closing over a camera's lens, a camera mounted in a moving vehicle sometimes, the scene flitting by, blurred. But then it also opens, on occasion, into an area with an organ being played, one with a very "churchy" tonality. There are some oddly loopy moog-like swirls, water, other things. It's disorienting and, first time through, a bit baffling. The combinations of sounds (sine waves threading through the weave) are wonderful, no question; the structure is more difficult to perceive short of the simple fact of the episodes (I haven't seen the score and, I've little doubt, much would be revealed therein).

At around 17 minutes, birds and wind appear. This serves as a brief interlude to the second section, quite a different creature than the first. (It's also where Stuart's contribution is foregrounded--I'm not sure at all what, if any, he playing he did in part 1. btw, both he and Pisaro are credited on the front of the disc so I'm doing the same here; to my ears, the equivalency seems entirely justified.) After a silent start, the sound wells up and is immediately ultra-complex. The first time I listened, my immediate point of reference was Xenakis' great "Bohor", which turns out to be a favorite piece of Pisaro's as well. A similar kind of massive, dense, infinitely detailed throb, a deep churning that possesses an almost geologic character. The sandworms of Dune might make such a noise during their burrowing.

It's an extraordinary block; in fact, I find myself visualizing the piece as a variation on Newman's inverted obelisk: several layers of fractured shards on top, irregular on the whole but well-formed individually, drifting onto this immense, dense slab which, in turn, balances on a tiny point, whose tip bears the entire weight of the piece--the brief return of birdsong at the conclusion.

If I have a qualm it's that I find the structure a bit unsettling, don't quite grasp it save for the image described above which I think is more in my head than anywhere else. But that central section is so rich--I take for granted that Stuart bears much of the responsibility for this--that it obviates any carping. A wonderful disc. In some ways, I find this a more difficult go--not on the surface but trying to parse out the structure beyond the rather monolithic block that's readily perceived. Part of me hears the work as an extended version of, say, an old Art Ensemble piece (I know Michael grew up listening to the AACM!) wherein there's a long quiet percussive build via malleted cymbals and other drony devices (see the beginning of "Ohnedaruth" on Phase One) that eventually explode into the theme or collective improv, etc. Here, the first 23 minutes have something of that aspect, a dense matrix of ringing tones generated, I take it, by bowed and struck metals. I'm sure it's more complicated than that, knowing his earlier work, and even so, it's quite enticing and endlessly listenable. At the 23-minute mark, however, Stuart breaks into what I think can be fairly heard as a trap set mini-explosion, as though Don Moye had just entered the building. Somewhat prior, Pisaro had begun generating very organ-y sounding sine tones and these persist in this section, continuing and complexifying (?) as Stuart switches to cymbals, again sounding very much in a kind of avant-jazz tradition. It then kind of "fans out", sublimating between brushed drums, softer cymbals, half-buried sines and I imagine much more. One gets the sense of spray, of vapor.

It quiets down to a gentle patter, skittering for the last several minutes; very lovely.

"Hearing Metal 3" feels very much of that arc--quiet/loud/quiet--but there are many strands threading their way through it and, five or six listens in, I think I'm still only getting glimmers of what's actually there.

Needless to say, both releases are automatic gets for anyone at all interested in Pisaro's music. Me, I'm getting ready to go out this evening and see him in duo with Radu Malfatti. Should be smokin'. :-)