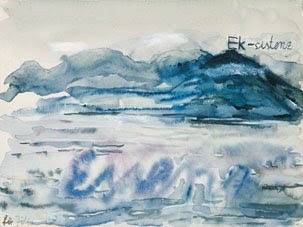 Saw a very good, small exhibition of Anselm Kiefer works on paper at the Met yesterday, worth checking out if you're around. Can't locate reproductions of my three or four favorites from the show, but the above is rather nice. Went with my friend Betsy; one of the (many) good things about going to a place like the Met with someone else is that even if you've been there countless times, which I have, the other person likely has her own special areas, areas you've perhaps not frequented. In Betsy's case it was a few medieval cornices from northern Spain and France, things I'm sure I've never even glanced at but which, once seen, are incredible. Thanks, Bets!

My niece Tiana had spent a couple of weeks in Mississippi a little while back, working on rehabbing houses in the wake of Katrina. While there, she became aware of a radio station (I forget the call letters) that had been more or less washed out three times in the past several years, their audio collection ruined. She joined an effort to secure donations of CDs to replenish their stock and, natch, asked Uncle Bri to contribute a few.

As it happened, several weeks ago I was running into something of an emergency situation regarding my own storage of CDs and had removed several hundred from the racks into a closet. This was done with no little pain. I've always liked being able to glance over and see, en masse, everything I have, including items I no longer particularly enjoy, for which enthusiasm had waned. But I was fairly ruthless; after all, I was only moving them several feet, placing them behind a closed door. Still, I went through, in alphabetical precision, parsing through them (inevitably encountering some causing the, "Hey! I didn't know I had this!" and even the, "Hey! I have two of these!" reactions) and culling those that, realistically, I'd likely never listen to again. Sent them into the closet already somewhat bulging with paintings and drawings and the book overflow that had long since outgrown our shelves.

So when Tiana called, I had a ready bunch of items from which to draw. At that point, it wasn't as difficult as I thought it might be. I went through the pile, pulling out things that were relatively straight ahead (ie, not things that nobody in the world, including me, would like, but more popular fare), ending up with as many as I could fit into a backpack for the journey to Poughkeepsie last Sunday, probably about 80. I'll list the casualties tonight...

I really like Kiefer's work across most of the years and areas he has worked in (of course some more than others).
Curious, Brian, about how many CDS are you shelving?
My hunch is you didn't donate No Pussyfooting to the cause.
:^)

I think I closeted about 200-250 (out of about 2,500) and of those, donated what I could fit into a backpack, about 80? I have No Pussyfooting on the disc that appeared in the early 90s with some of "Evening Star" and a handful of forgettable tracks (still pissed that "An Index of Metals" wasn't included!) but no, that didn't get jettisoned. However, a bunch of late Eno did, including "Nerve Net", "Neroli", "Shutov Assembly" and "Spanner" (with Jah Wobble).

All my Dave Douglas, a bunch of later David Murray, other odds and ends.