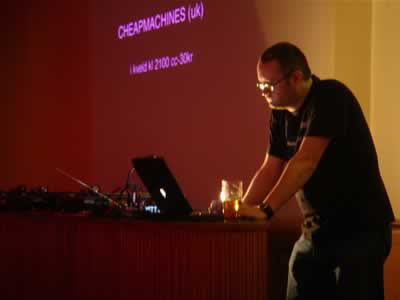 Originally intended as a collaboration with the late sound artist Helmut Schafer, the pieces here were realized by Philip Julian in contemplation of that project. It's sort of divided into two parts: the first four tracks are rough and gnarly electronics, excellent harsh tumbles along a spiky trail, full of detail and interest. There's then a brief calm, a cut full of rich hum. The next two tracks are airier, full of metallic, echoing pulses and hums, hollow and foreboding. The final combines the two approaches into a mighty burr, a roaring grind like some massive drill worming through stone. Good, tough disc, well worth a hear.

A reading by Marley (from a project he did with Rhodri Davies) is worked by Montgomery in ten equal length pieces--almost 4 minutes each. They emerge as gentle drones, ringing, silvery thrums that snake through the atmosphere. Usually, even when thoroughly messed with, one can detect vocal qualities when the voice is the source but I'll be damned if I can do so here. While initially holding my interest, the relative sameness of the tracks (though they do kind of evanesce along the way) and their gradual slide into what I think of as "loopy" territory caused that interest to wane. I think I would have preferred a single, lengthy piece; not sure about the rationale to slice into equal slabs. The last track, though, expands on the sounds of the empty room wherein Marley spoke and is wonderful--just rumpled air.

Multiple, richly layered sine tones, often acting in concert to give the impression of perpetually rising or falling (á la Tenney). The sonic effects, the ear drum-rattling and all, are fine but the conception struck me as too shallow, too science-experiment-y for me to find aesthetic purchase.

Thanks very much for taking the time to listen and comment on "Secede" Brian, much appreciated.

Thanks for noticing our CD, Brian. Just one clarification: the original recording of Brian Marley reading was just short of four minutes. The audio file has not been sliced, diced or looped in any way, just treated with various effects. This, as our accompanying text perhaps fails to make clear, is why the tracks are of equal length.
Best wishes
Will