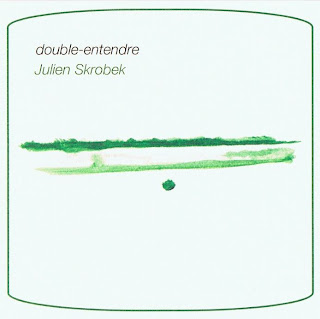 Wherein Skrobek takes a cue or two from Sugimoto but heads out in an oblique direction. On the first of two tracks, guitar strums isolated in space nod to Taku but the strums are far more colorful and the intervening space, though often silent, is inhabited by gassy rumbles and electronic bleeps. I get something of a slowly whirling constellation image, four or five elements wheeling into "view", but in a complicate manner, their rhythms not divisible into one another so the entrance of each from the darkness is a surprise. The second is sparser, made up of a handful of electronic sounds (plus the odd, pretty guitar strum), again each circling to the fore, alone or in unpredictable combinations. Something very nice, very unforced about the way Skrobek feeds the elements into the mix; the space between attains a plasticity of sorts. Very thoughtful, very good work. 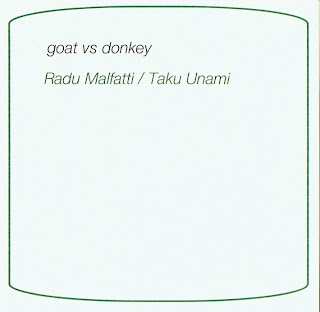 A live recording from November 2008. I've been terribly remiss in keeping up with Malfatti's work the last few years but from what I gather (there's some good discussion in this IHM thread, this is a relatively rare recent example of his improvisatory work. That same thread has arguments pro and con the ambient noise that's very present here as well as the somewhat rough recording quality, neither of which bothers me in any way. Malfatti, as is often the case, blows long, softly burred tones on his trombone, spacing them out over irregular intervals, allowing substantial time to elapse between exhalations. Unami excites small items via computer (or directly?), causing buzzes, rattles, (hand-claps!) etc., also in a periodic manner. In his case, one sometimes can't quite tell which sounds are his, which are the room's. Again, no real matter. The piece flows beautifully. Unlike the Skrobek, there is a sense of a pool, of gentle ripples and floating objects jostling one another; everything is "there", it's just a question of what wafts into audible range at a given moment. I find it absolutely fascinating, serene, warm and stimulating. One of the best new releases I've heard in a while.

In large part, this recording delivers kind of what you suspect going in, though there are rough edges to be found. It's generally quiet and sparse but explodes harshly (though briefly) on several occasions. On first listen, I was very much into it, enjoying the blobs of sound floating around--Hayward's burps, Davies' plinks and Unami's rattling. On second listen I was a tad less convinced, maybe finding the sound too up front when I wanted it to recede. Subsequent hearings find me going back and forth, probably to the disc's credit. I find it messes with my expectations regarding space--it gets a little claustrophobic at times, something I normally am somewhat averse to but here...dunno. Back and forth. Interesting recording, certainly worth hearing.

I´m glad you have like the records. Thanks for your words
our friend Mattin told me that you´re thinking to moving to northern spain, if you need held, please contact us!

Hi Miguel, well, it won't be for a while if we do, but we're visiting in June for a couple of weeks. I don't know if we'll get to your neck of the woods, but I'll be in touch, thanks.

Brian, do you mean Sugimoto in the first line of your Skrobek review? If not, who is Sakamoto, please.

Arggh, yes, of course, thanks Jesse.