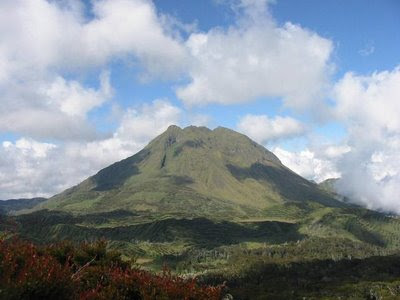 So there I was, five puzzles under my belt, no mistakes of which I was aware, having just sledgehammered the most difficult puzzle of the tournament and looking forward to the sixth and, likely, easiest one, a Maura Jacobson effort. I zipped through 98% of that one as well before slamming into an unexpected wall. In the upper center of the grid, there were two five-letter across entries atop a puzzle wide theme entry. The theme was kind of a Spoonerism thing, the one in question was clued as something like, "Puts away the king's seat", the answer being, "STOWS THRONE AWAY" (which I hadn't figured out yet). I had "STOWSTH AWAY" at the time. The H was the third letter in MEHTA coming down. I only had the M and E for the two five-letter acrosses, clued, "Highest peak in the Phillipines" and "Love to bits".

That's where I sat. The down clues weren't helping me. It was a case, to an extent, of having too much knowledge as, when presented with a 5-letter word beginning with M and it involving a mountain in the Philippines, the obvious answer is MAYON. Obviously! Try as I might, however, I could fit it in no more easily than I could convince myself that Zubin's last name was spelled MAHTA, allowing me to enter ADORE instead of EATUP.

So while my peripheral vision and hearing notified me of dozens of lesser solvers (! ;-)) turning in their sheets, I sat there in confusion. Eventually after an eternity lasting three or four minutes, I figured out all but one letter. I had M_APO. The blank crossed with _ARS, clued as "Men in a tub?" Frazzled enough by my snail-like pace, I thought, MOAPO/OARS, and wrote in an "O". Moapo sounds entirely (possibly) Tagalog. (I did have an extra bit of annoyance floating through my skull--that Linda, sitting two seats away, probably knew the answer off the top of her head. This proved to be utterly not the case...). "OARS" for sailors sounds good to someone momentarily without the capacity to think of TARS, which is a rather better answer. And, of course, Mt. Apo, pictured above.

So, two dumb mistakes in consecutive years, this one lowering me to 39th place (out of 685). Cost me between 20th and 25th depending how much time I should have taking whilst cruising through the puzzle. Ergghh...I found out that, last week sometime, one fellow had set up a Fantasy Crossword Draft, seeding the top 40 players, myself at 25th. Pretty good peg, aside from not allowing for idiotic mistakes on my part.

Despite this, a wonderful time, hanging with the usual great crew plus my dear friend Betsy who I'd only not seen in 32 years before a couple weeks ago. I believe a photo was take of yours truly in the company of the notorious Okrent brothers by a staff photographer, which I'll add here when it's been uploaded on the Xword site.

Ah, just recalled my favorite line of the event. The on-stage finals are accompanied by live commentary from Merl Reagle and Neal Conan (of NPR). Yes, like it's a sports event. One of the answers in the final puzzle was SWANSONG. Quippeth Reagle, "It could've been clued, 'How the star of Sunset Blvd. was listed in the phonebook.'" 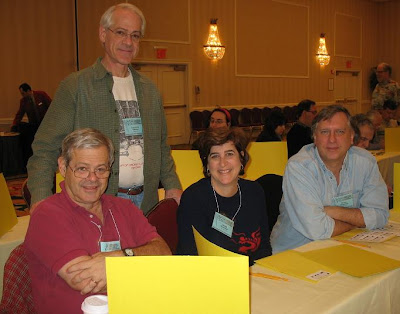 "one fellow had set up a Fantasy Crossword Draft"

just when you think you've seen the depths of geekiness, a new low... :)

you missed a really good Lambkin/Lescalleet show at Wesleyan, quite different from the Issue Project one. this one was structured as a 'Breadwinner' set, incorporating the first and last track from the record with some new material in between, I think it was about 70 minutes long.