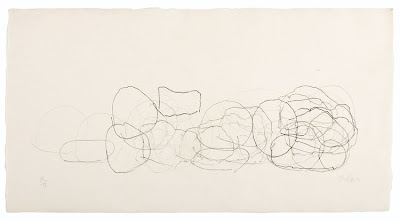 Finally made it up to the Guggenheim yesterday to see the (annoyingly titled) Third Mind exhibit (the influence of Asia on American artists, 1860 - 1989). It was far more weighted to the post-1960 period than I expected. Of the earlier work, the Whistlers stood out, including this amazing Nocturne from about 1870, iirc: 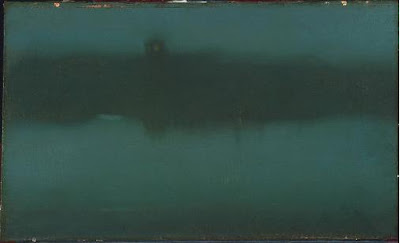 There were also a couple of Utagawa woodcuts there as a reference point that outclassed the rest of the field.

Some spectacular works from the 50s and 60s, though, including a gorgeous Agnes Martin grid painting, two incredible Reinhardts (the blackest of his cross paintings that I've seen), some fine videos, a relatively small installation of the Dream House (I'd never been inside one before! Not sure how that never happened) and a whole section devoted to Fluxus.

But the highlight was a room housing some 15-20 visual works by Cage, with several of the "Where R = Ryoanji" series, one of which is pictured above. Just so beautiful, especially the pieces on smoked paper, a couple I'd seen before. Such grace, such openness, such musicality even. I know there's at least one book devoted to his prints, "To Sober the Quiet Mind". Anyone know of others? (I can't locate an image of the smoked paper piece from the show--can't quite recall the title, something like "Eknida"--but it was generally not too dissimilar from this one: 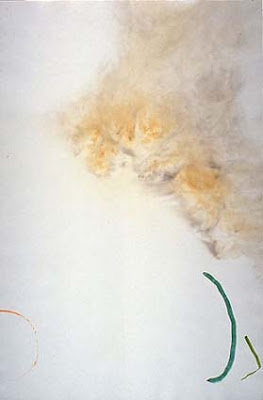 Afterward, Carol and I ambled uptown, ending up at 106th and 3rd for a fine lunch at a Puerto Rican place--roast pork, cod salad, yucca. Took a lovely stroll across Central Park up north, past the intriguing, mammoth, steam-issuing piles of compost, through the woods (found a great tree where a thick, very symmetrically unfurled vine had been barked over, creating an amazing kind of sculpture), into my old neighborhood around West 105th St. Lovely day, everything enhanced by those Cages....
Posted by Brian Olewnick at 3/30/2009 08:36:00 AM

I like the Cage series.
I've had a small print of the Sengai (Edo period) Circle/Triangle/Square framed on my wall for 20 years.
The Iron Cow of zen!