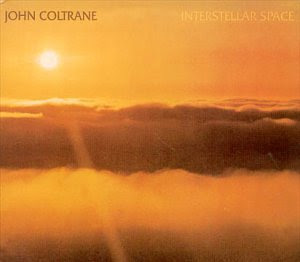 For a supposed avant jazz fan since 1972, my Coltrane LP collection is extraordinarily sparse. Aside from a reissue copy of "A Love Supreme" from '86, which I'm pretty certain was a gift from someone, it only consists of two items. There's a reason for this, sorta. Coltrane, along with Charlie Parker, was easily the most played musician on my radio station of choice, WKCR. In fact, the first time I came across that station, in the summer of '72, it was in the middle of one of the longer versions of "My Favorite Things". With some exceptions, I tended to devote what record buying funds I had to newer music and since I was hearing Coltrane constantly on radio, he got short shrift in the collection. I've stocked the shelves during the CD era though, even here, it's virtually all post-1960 work, with a heavy concentration in the last few years of his life.

To that extent, it's not too surprising that the two LPs I do own are from that final period.

As always, there may well be some nostalgia at play, but if I had to pick one Coltrane recording, "Interstellar Space" might be it. Especially for "Mars" and "Jupiter". What incredible, protean power. Always get the mental image of a huge dam breaking. Can't say much that hasn't already been said about the session though. 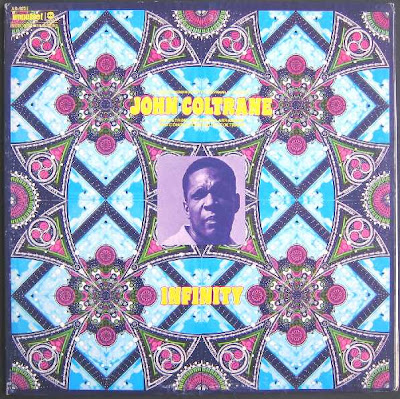 This is probably an odder one to happen to have purchased. Might've found it for cheap in a college store or cutout bin. It's an oddity, to be sure, but an attractive one, imho. I wrote it up for All Music Guide and stand by that opinion. Don't keep up with Trane disciplism, so I've no idea what the consensus up or down is these days. Listening now, it reminds me a bit of Jarrett's mid-70s US quartet a bit, "Living Space", anyway.
Posted by Brian Olewnick at 7/13/2008 10:51:00 AM