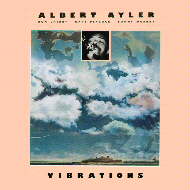 Benno Friedman. When Arista/Freedom began issuing records, about 1975, they used Friedman's photos for many of their covers, especially the quasi-reissue line that put out recordings from the 60s, including this one by Ayler. Always found his (Friedman's) work pretty fascinating, his messed around with photos that reminded me a little of Lucas Samaras but without the self-sensationalism. I recall coming across his name now and again in art or photogtraphy magazines over the years, but I don't think I've ever seen very much of his work outside of album covers. Searching around now, I see he's advanced to digital manipulations, sometimes of existing photos including stock from old Westerns.

re: Ayler, well, one of my many Halls of Shame. This is the only vinyl Ayler I own and I've only one disc as well (the reissue of the ESP-Disk, Bells/Prophecy). When I got into the music, he'd just died and he fell into that category of: I'd hear his work all the time on KCR and never really got around to picking up much. I do love his stuff although, I'll admit (ducking) that I find a little bit of sameness in much of his work. The overt "spiritual" referentiality can also, admittedly, grate on me. But hey, a fantastic record. Cherry, Peacock, Murray. Excellent Ray Ross photo on the back (I'll have to discuss Ray sometime).

If you've gotta have just one, that one is one to have for sure.