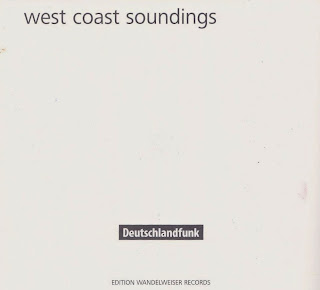 A compilation of work by twelve composers, ten of whom studied with James Tenney and/or Michael Pisaro (who are also represented by pieces here) at Cal Arts, performed by a quintet (or parts thereof) consisting of Frank Gratkowski (bass clarinet, clarinet, alto sax, radio, triangle), Seth Josel (electric guitars, mandolin, radio, triangle), hans w. koch (electronics, radio, triangle), Anton Lukoszevieze (cello, triangle, radio, voice) and Lucia Mense (a range of recorders from sopranino to contrabass, radio, triangle). One of the heartening aspects, in a sense, is how far many of the works "stray" from a Wandelweiser aesthetic--it's always good to hear evolution outwards. A brief description of each work:

Mark So, segue (2007) - Long, soft lines, very warm, in an interesting, kind of prismatic relationship with the clearly spoken text ("Segue", by z. Laurence-Juan)-THe lines are lovely and relate to the text in non-obvious, haunting ways, occasionally splintering softly into frayed endings.

Michael Winter - small world (2008) - More aurally fragmented and diverse (apparently constructed via graphs and game theory) with disparate elements calmly meshed, even as the elements themselves are thorny, almost strident and eruptive. A collage feeling but also oneiric.

Chris Kallmyer - Between the Rhine and Los Angeles (2012) - Performed here by electronics and electric guitar, from a score in which the musicians are asked to trace the form of a river, resulting in a rich, twisty drone that hovers now and then, meanders off. Nice thickness of tones, often more going on than is immediately apparent, drawing me back a few times after I mistakenly thought I'd heard it thoroughly.

Tashi Wada - Nest (2008) - Realized here for recorders, clarinet and cello, along with field recordings by Wada. koch's note says "accentuating the tonal content of field recordings" and you can feel that approach, the musicians searching for some affinities with the birdsong, rustle and background hum of the site recordings, like a chamber trio enhancement of Pisaro's "Transparent City" series. Very beautiful.

James Tenney - Harmonium #1 (1976) - for quartet, excluding koch's electronics. A gorgeous work, all long shifting lines, endlessly subtle and complex planes of interaction. I wasn't sure if I'd ever heard the piece before (I'm unforgivably behind in my Tenney) so I found a version on-line by the Trio Scordatura, also very beautiful, but I enjoy this one more. Great work.

Liam Mooney - 180° (2011) - For dry ice and triangles. As I learned courtesy Casey Anderson, sublimating dry ice can somehow activate resonant surface if held just barely above them (a buzzing sound occasionally heard here, occurs if you come too close). It's a wonderful sound, a kind of ringing, metallic rattle, constantly in flux and we get to soak in it for 18 minutes here. This is "all" that happens--steady-state on the one hand, endlessly varying on the other; I love it.

Scott Cazan - Outliers (2010) - Per the notes, Cazan "employs a computer, gradually reducing available pitches by filtering out ones that have been heard". As played by the quartet (again, sans electronics). The work is calm on the surface, even stately, though a subtle sense of agitation grows as, I presume, the palette is reduced. Fascinating process, engaging music.

Laura Steenberge - Waltz (2013) - a dark, eerie waltz, with low cello and woodwind chords and sharp guitar plinks. Probably the most "traditional" piece here in some ways, quite cinematic in an expressionist way.

Catherine Lamb - Frames (2009/2013) - For grand bass recorder and cello. Lamb's swiftly become one of my favorite composers around and this work simply buttresses that feeling. It involves investigations of tuning played out in long lines but the magic lies in the poetry of choices, the sheer deliciousness of the note pairings, the overlapped, irregular durations, the grain in both instruments. As they say, worth the price of admission on its own. Beautiful.

Quentin Tolimieri - Trio (2013) - Clarinet, guitar and cello. It nods to a kind of post-serial, lyrical abstraction but then begins to dissemble that, the sounds becoming more and more sparse, eventually leaving substantial silences. There's a fine progression from the "normality" of the beginning to the poignancy and sense of abandonment at the conclusion that makes the work very beguiling and moving.

Casey Anderson - possible dust (2011) For five radios, very un-Wandelweiserian, exposing a wooly chaos of sounds from radios that sound randomly tuned (and frequently changed) but I imagine there's a system in place somewhere. In-between-stations static abounds, with speech (German) next in line, only the odd snatch of pop music. In this context, it serves as a bracing tonic but stands firmly enough on its own.

Michael Pisaro - A single charm is doubtful (Gertrude Stein) (2005) - Part of the Harmony series, played here by, once again, the quartet without koch. As ever, wonderful music; somewhat more forceful than you might anticipate, the recorder very much up front, gilding the sustained cello and alto saxophone, all (with the guitar) creating an emergent pulse amidst the long, long tones. Absolutely stunning, especially in its sense of time negation. It just continues on until it stops.

A fine collection then, one that's obviously necessary if you've the remotest interest in this area of music and, for me, extra valuable for exposing me to music created by composers of whom I've had no or very little previous experience.

Available in the US from Erst Dist