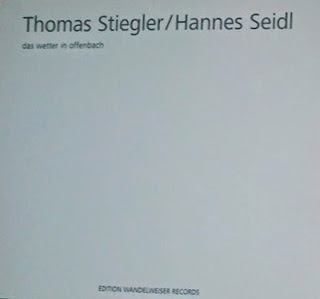 The notes for this piece are entirely in German and, after running them through the vagaries of Google Translate, I still have only the roughest of ideas as to the ideas behind the work, so I'm tempted to simply go by what my ears tell me. Suffice it to say that t has something to do with bicycle trips by Stiegler to the town of Offenbach (nothing to do with the composer as far as I know), the sounds encountered and also, possibly, the sounds of certain medical equipment. Who, of Stiegler and Seidl, contribute what, I've no idea.

The construction lasts for forty minutes, most of it taken up by field recorded sounds interspersed with a smooth, electric hum (not sure of the source, presumably computer or synth) whose pitch fluctuates slightly but which retains its general character throughout. It comes, lingers for several seconds, ends; sometimes it overlaps the other sounds, sometimes it stands alone. Every so often, you can pick up a quieter tone as well; perhaps there are more layers than meet the ear. In the interim, we hear various "everyday" sounds ranging widely and including crunchy footsteps, car and water sounds, geese quacks (quite a flurry at one point), airy fields. It's calm, with a sense of patient forward movement consistent with a relaxed bike ride. The listener settles into this travelogue and it's quite pleasant. Around the 34-minute mark, just after you've experienced a series of gently iterative mechanical sounds, possibly some of that medical equipment in action, the scene shifts drastically. Very much as if the CD in your player has suddenly changed, you hear a funky disco-ish line, not recorded in the field, but pure; very disorienting. It dissolves in less than a minute, first overlaid with discreet hums, a muffled voice, then replaced by some backwards tape, that familiar hum. It's almost as though one has been biking in the rural countryside, engaged in a reverie, only to find oneself back in urbanity without realizing it. Despite the hum, the last several minutes have a different character, including a set of dull, metallic clangs,before automotive noise ends the piece abruptly.

It's an odd work, with its own unique if awkward sound-logic. I found myself enjoying it pretty well though I'm still unsure if I've comprehended it decently.