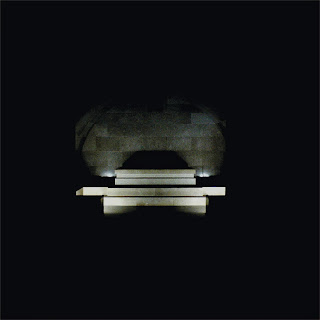 The label site offers the description, "Lack of musical material, minimalism but not for it's purposes" and that's not a bad encapsulation. The music consists of sets of phrases, always bowed, generally discrete. The initial sounds are one to five note lines, each note discrete, no obvious pattern. The air is dark, somber, the notes low but dry. Almost inevitably, one conjures up the image of a lone entity in an unlit space; "Beckettian" seems too easy, but hard to avoid. Over the course of the LP, Moser's attack varies, but not too much--a section will have slightly higher, grainier tones (that recalled some of Feldman for me), but things inevitably settle back into that sort of disengaged area where "mournful" would be too strong a term. Resigned, maybe. Yet, pace Beckett, it goes on, never to any point but incapable of doing otherwise, one desolate step at a time. The sounds themselves are easily digested but the overall effect is, intentionally I suspect, oppressive, gathering force by sheer dint of the relentless refusal to accommodate. It's quite persuasive in this regard and I have to admire Kajkut's (and Moser's) steadfastness. Strong medicine, good work. 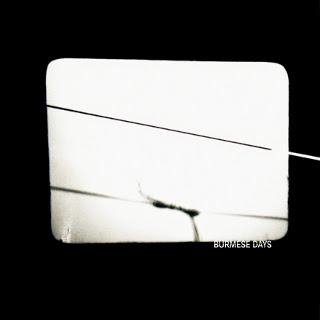 I haven't read the Orwell novel from which this LP takes it's title though, I'm guessing, it shares that author's concerns about Western imperialism in Southeast Asia, even if abstracted beyond direct reference points. Kutin (field recordings), here, is assisted by Berndt Thurner on Burmese metallophones and Dieb 13 on electronics and turntables, melding their instrumental compositions with his recordings to form the two side-long works. And they sound pretty great, some of the finer integrations of field and instrumental sounds I've heard in a while. I'm guessing this likely due to Kutin's skills at composing the material but surely at least in part a result of the reticence of Thurner's and Dieb 13's contributions which routinely remain at a low level in the mix, often nearly indistinguishable from the found sounds. The whole affair is rather subdued but very alive and subtly colorful, seething with a quiet pulse, from the opening chitters of insects (accompanied, I think, by Dieb 13's stuttering electronics), through attenuated near silences bearing faint hums, through cloudy, zone-tinged climes with muffled drums, voices, those metallophones. It' a heady journey, especially Side One, murkily cinematic, unsettling and all-around excellent. Don't pass on this one, it's a really fine realization. 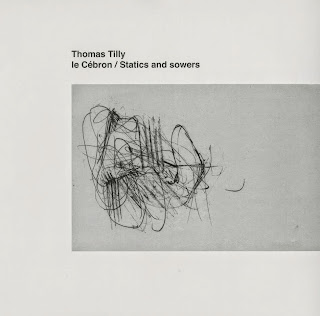 Fitting, I suppose, that a record, half of which chronicles the shattering of ice, should be pressed on clear plastic.

Side One documents said breakage, recorded on the shores of Lake Cébron in France, ably assisted by a trio of shatterers. The combined crackling sound of the destructive process necessarily includes the sense of watery ambiance, a lovely combination. Tilly maintains that, apart from a "slight equalization no electronic modification has been done" which makes the sounds all the more astonishing, seeming, as many of them do, to have been culled from an elaborate and dense bit of INA GRM-y software. There's a minimal sense of the surrounding air, much more of a feeling of being right at ice level, inches away from the action. The piece has clearly been composed and it flows, bumps and all, very well, a natural sounding cascade of shards.

"Statics and sowers" involves beehives and electronics, and is roughly divided into three sections. The apiaries come first, an intense and just slightly creepy horde of buzzes near and far; fine depth here and more than a little uncomfortable. Quite abruptly, the bees are sharing the stage with a swathe of electronics (perhaps bee-sourced, hard for me to tell). A loud static charge all but submerges them as the music moves into a multi-layered, throbbing drone (pun intended). I found this portion less interesting, the general sound a bit too much like any number of drone works. But matters are redeemed a few minutes from the end when another harsh shift reintroduces the hive, but dimly, embedded in static fragments and barely contained feedback. This somehow comes across as very disturbing, not sure why. But it's an effective end for a very interesting venture. Worth hearing.