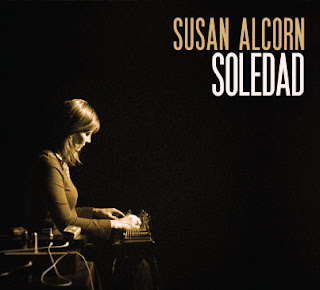 A recording of improvisations for pedal steel guitar (Alcorn) (and bass, Michael Formanek, on one track) on the music of Astor Piazzolla, again save for that one piece, composed by Alcorn.

My experience with Piazzolla's music derives largely from the recordings that began surfacing on the American Clave label in the mid 80s, as well as seeing the concert in Central Park that also saw release. I loved it very much and still do, though I have no real working knowledge of tango as such and have never deeply investigated the genre. Which is all to say that, even if I've previously heard the four compositions presented here--and I do recognize a good bit--I don't "know" them and am approaching this recording on a much more naive level. For that matter, I've only heard Alcorn on a handful of occasions at which times the music has nestled in a decidedly more free jazz/improv area than the sounds heard here.

That said, this is a largely gorgeous recording. With her own playing, as heard on "Suite for AHL", I hear her coming out of a kind of Hans Reichel/Fred Frith area, producing tones I tend to think of as "globular", free but with no aversion to implied rhythms or hazy tonalities. This approach is a fine match for tango, at least Piazzolla's idea of same, which combines both an incredible sense of languor with ferocious sharpness and acerbity, the perfumed rose lying in the cigarette-strewn gutter. The title track sets the tone with gentle but crisply struck chords, luminous but containing shadows, the melody beautifully stated, clear but immediately leaving room for expansion. She keeps to the basic tango melodic structure yet always allows for a certain haze, a tonal ambiguity that I find to be an excellent complement to Piazzolla's conception, never pushing it arbitrarily into atonal free playing. It's likely my favorite track here not only for those reasons but also for its relative concision; elsewhere, on occasion, things linger on a slight bit long. "Invierno Porteño" allows for a bit more diffuse spread into scattered attacks but, again, Alcorn only avails herself of it from time to time, just an added flavor and an acknowledgement of the possibility, remaining in slow to medium-slow tempi, keeping things suitably dark, even interpolating a bit of Bach (?)--can't recall if that was in the original. Piazzolla's "Adiós Nonino", written on the death of his father, is treated similarly though making greater use of rich hums, creating wonderful pools of sound out of which will sometimes emerge delicate cadences or a surprisingly straightforward expression of a theme. Alcorn's suite keeps with the sensibility of the rest of the disc, Formanek contributing with strength and imagination, Alcorn taking the opportunity to offer a few freer forays while also writing themes only tangentially related to tango and quite attractive on their own terms. The concluding piece, "Tristezas de in Doble A" is the one that, at moments, drags a little bit for me, the languidness threatening to overwhelm, Alcorn on occasion venturing perilously close to Frisell territory. But it's a minor quibble.

I've no idea how fans of Alcorn will react to this offering but think that Piazzolla aficionados will receive a huge amount of enjoyment. Recommended. 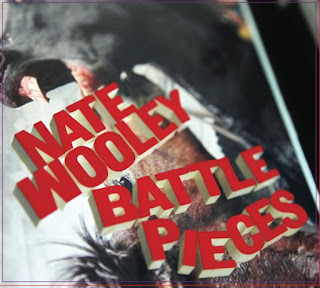 I was expecting to hear more of a Braxton vibe here (he's thanked and the recoding was done at the Tri-Centric Foundation Festival at Roulette) and you can pick up tinges not and then but, to Wooley's credit, there's little of direct import although the Braxtonian conception, I'm sure, had a part to play in this music's development. If anything, I found myself thinking more often of Leo Smith as well as detecting subtle nods to minimalist traditions but overall, it's very Wooley.

The seven tracks alternate "Battle Pieces" (I-IV) and "Deconstruction" (I-III), the latter worked up from tapes of Battle Pieces material. There are sections for solo and duo improvisation scattered throughout and one has the vague sense of some sort of scaffolding holding things together, the solos curling out like tendrils from the latticework. I'd be curious to see the score. Where I find the structure, obscure though it is (to me) intriguing, apart from Wooley himself, I find the language employed by the musicians involved to be somewhat less so. I'm guessing a bit, but I think the moments I find more enjoyable are those penned by Wooley. Where it seems clear we're dealing with improvisation, Laubrock (with traces of Mingus-era Dolphy occasionally emerging), Moran and Courvosier are more than competent but settle in to the sort of phrasing and construction that, for me, has been all too commonly heard over, say, the past 20 years. Again, by no means bad, just unexciting and really non-dangerous. Moran does often use enough distortion to render unto his vibes an old Fender-Rhodes kind of feel, which is welcome. Listeners more attuned to the current avant-jazz scene, particularly that around the compositional axis, will entirely disregard my concerns. Myself, I get the most reward when listening as a kind of chamber music, stepping back enough to appreciate the structure while trying to block out aspects of the individual contributions. In that case, there's much beauty to be found as well as several surprising resolutions that cause one to re-examine what occurred before. Im wondering if this is performed with varying ensembles--could be very interesting.

Still, as is, well worth hearing and a notable addition to Wooley's ever-growing canon.