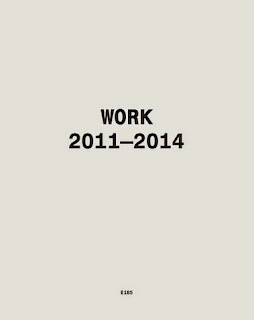 Wall's music sounds like no other. In fairness, I should say Wall and Rodger's as the latter is responsible not only for the texts herein but also a good portion of the "computer generated sounds", but to the extent that the work occupies at least an adjacent sound-world to those which Wall has produced since 1995's "Alterstill" (the first I heard his music), it's recognizably his product. He helpfully diagrams the sequences on this release:

Like many of his previous offerings, "Work 2011-2014" is short but it's a brevity born of concision and severe economy, packed with an extraordinarily dense assemblage of slivers of information, needle-sharp, scything through the dark, Beckettian text often spoken in a slurred, bitter manner. I have this image of a razor-edged knife weaving through large hunks of meat. Tiny knives though, so even even there are thousands of them, they have very little mass, leaving a ton of "air" in which the events can take place. It's very strange and pretty much unique to Wall's sound, as far as I know, instantly recognizable. Wall is legendary for taking massive amounts of time to work on minute slices of sound; I take it this is a result and it's a bracing one.

Rodgers' words command equal weight, however. He uses software to alter his voice constantly, enough that it rarely sounds very much the same on several levels, including apparent distance (blurred, far away and indistinct to mic-bumping closeness), pitch and other, more unusual variations including a disturbing, moist kind of lisp ("Were I was going"). The text is gutter-level angry, occasionally imagistic and not above (I suspect) combining words for the sheer deliciousness of their sound like "marzipan supremacists" or the concluding phrase, "angular cluster". There's an extract printed inside the sleeve, only a sentence of which, as near as I can determine, is used in the recording. To get a sense, it ends:

Head on school desk tongue where you're in saying, trying to say i've revolved for years but cannot not be sort of attractive at the meeting place. There is no one ghost all spectatres in endless lossed warm frame. Wished on peak roseate possibility. Squandered thereafter.

Wall's sounds are always overtly electronic, no attempt at masking. How he manages to render them utterly different from your normal computer-induced activity, I've no idea but to these ears, they sound absolutely fresh, sparkling in an alien way. I don't recall him doing it in earlier work but on occasion, he allows a small dollop of repetition to creep in, for at most several seconds and often less than that, perhaps offering a momentary foothold for the listener, only to quickly snatch it away. Rodgers uses iteration more straightforwardly in the subsection, "the same", with fine bitterness. Refreshingly, there's no arc. It's episodic but with each chapter bearing similar heft, moving the listener from room to room in a very large, troubled building, no entrance or exit.

A tremendous, sinewy-tough piece of work, one of my favorite speech/music recordings in a long time, maybe ever.

And check out Wall's own page for further good stuff.