I remain somewhat at a loss as to what I can say about field recordings like this one. Recorded in Honduras, one experiences the lush, bird-filled sounds of jungle or near-jungle life, occasionally intruded upon by man-made activity like a rumbling boat motor. There's a richness and density in play that I imagine is the result of post-recording construction on the part of Nogray, though I'm by no means certain of that. As is all too often the case, I can easily understand engaging in a deep listening situation were I in this place, within the extended space of the environment but have less patience for it listening over a stereo system. There may well be more going on structurally than I'm able to parse but I tend to read this "naturalistically", if you will and more, get somewhat put off by the, to Western, urban ears, exotic nature of the sounds. Nogray writes of encounters with local shamans (buyeis) and their mystical traditions which, admittedly, puts me off a bit as well, so I'm doubtless not the ideal recipient of this work. This past fall, I caught a lovely, very sensitive performance by Nogray on tuned glass bowls and have heard other excellent music from him but this side of his work doesn't do as much for me. For pure field fans, though, there's much to enjoy, everything, from birds to mosquitos, is recorded with extreme sharpness and detail. Maybe I just desire more ambiguity.

Why does Sakellariou's offering, recorded in and around the Lithuanian title city, have more resonance for me? Partly, perhaps, the abundance of relative quiet and inactivity as opposed to the overwhelming density of the jungle fauna, possibly due in part to the higher percentage of human artifacts, the mid-distant grind of machinery and the counterpoint it provides to birds, water and wind. It's bleak but not without beauty, like a brown/gray landscape containing glints of silver and blue. There's a far clearer sense of the constructor's hand here as well, including abrupt cuts and (I think) layering of disparate elements, both of which, in this case, I find appropriate and gripping. The sense of Tarr-like poetry is strong here, the abstract washes of sound, the blurred rumbles, the cold harshness--very strong, very evocative. I've said before that my aesthetic reaction to many works in the field recording area can be poetic, difficult to quantify, more so even than with "standard" music and it's the case here as well. Something rings true, valid and worth contemplating. I'd previously heard Sakellariou, under the nom Mecha/Orga, in collaboration with Roel Meelkop, Julien Ottavi and on his own "41:38" and enjoyed them greatly. With this fine work, I'll be on the lookout for more. 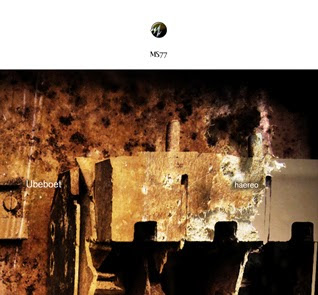 Ubeboet (Miguel A. Tolosa), though he also uses field recordings as a primary source, strikes me as occupying a slightly different zone, one that is perceived as more "musical" in the sense that many ofthe sounds he chooses to use have implicitly tonal elements, buried though they may be. The deep hums, for instance, that line the seams of "Umbrae" could be thought of as bass pedal points from a massive organ. The worlds he creates often seem to owe as much to the Fennesz tradition as purely field recordings. The result is a full, very rounded sound world, the edges sanded off a bit too much for my taste, negating the rawness of Sakellariou's disc (not that Ubeboet had the same goals in mind, of course, just that I prefer one more than another). That said, the work flows smoothly, ripples across its surface attractively and, like both of the preceding, is beautifully recorded and solidly constructed, perhaps with a bit more of a latent science fiction undertone, the muffled clangs summoning images of moribund machines, far into the future.