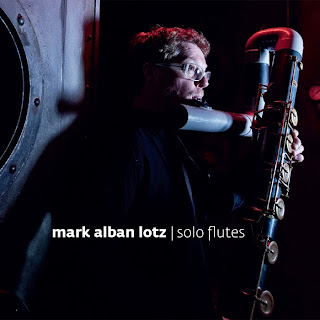 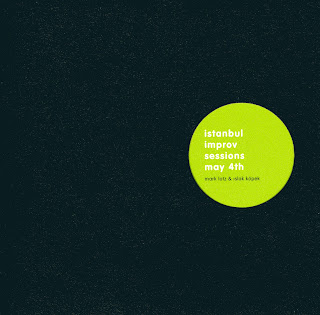 Lotz is a German flutist who, as far as I can ascertain, has been making a good name for himself in European jazz circles, though the solo effort shows his clear intentions to diversify quite a bit. Kevin Whitehead, who wrote the notes for the Istanbul session, cites his childhood traversing areas from Thailand to Uganda with his musicologist father and one hears a clear affinity with various musical approaches, including European free improvisation.

The variety of attacks can be something of a problem when arrayed in disc form, here comprising 17 relatively short tracks; it almost necessarily becomes a palette showing what the musician is capable of rather than a satisfying whole and the listener is more or less forced to choose as to which pathways he deems satisfying, which not. I should first point out the obvious: Lotz is a fantastic flutist, evincing great command, facility and imagination. He uses concert flute, alto flute, bass flute, PVC contrabass flute (the cover image)and voice. I can't list each track but, for example, he goes from a disarmingly attractive key popping exercise ("Albert Speaks") to a ghostly series of tones ("Aş Şaḩrā' ash Sharqīyah (Eastern Desert)") that morphs into strident overtones reminiscent of Abdullah Ibrahim's relatively rare flute playing, also quite attractive. From thence into "Whole Steps", a piece that sounds like a take on some Dolphy composition I can't put my finger on. He vocalizes through the flute her and elsewhere, making the later, lovely tribute to Kirk, "For Rahsaan", appropriate. "Hungry III" marks the first venture into extended techniques, here a liquid gurgling (I take it using water) and, to me, it's a misstep only because it's the type of approach we've more or less heard before and which, usually, comes off simply as an effect, having no particular reason for being other than to show its possibility. I begin to get the impression that Lotz, to my ears, is better served the more "traditional" he plays, either via jazz or contemporary classical, a suspicion borne out by "PVC Mantra", a didgeridoo-esque piece that, again while displaying great command, doesn't really get past the surface of the deep, vibrating sound. Then again, the ensuing track, "For Moth", works beautifully, a cascading whirlpool that's both technically very impressive and, somehow, connotes a musical identity beyond the technique, a presence. So it goes through the recording. For each attempt that doesn't quite make it ("Adam and Eva", "Do Not Swallow!"--in fact the set of "Bass flute Sequenzas", presumably a nod to Berio--), there's one that stands perfectly well and solidly on its own ("Piccolo for Makeba", "Major Circles", "A Fine Winter"). As is not uncommon in my experience with certain musicians, I find the "straighter" efforts to be more convincing than the experimental ones. Given the brevity of the pieces, I might have liked to have heard certain ideas, even ones that initially don't strike me as promising, delved into at far greater length, to see if more could be wrested out. So, I find "Solo Flutes" both frustrating and intriguingly impressive. I'm curious to hear where Lotz goes from here.

The Istanbul set is, needless to say, a very different affair. Islak Köpek is a quintet with Şevket Akıncı (guitar), Kevin W. Davis (cello), Korhan Erel (laptop, controllers), Robert Reigle (tenor) and Volkan Terzioğlu (tenor), a band, if this is a good example, that seems at home in the efi tradition. Again, we're presented with many (fifteen) short pieces, none over six minutes and I'm not sure that's for the best. The potential sextet appears in several formations containing two to six players, Lotz always present. In general, I prefer the tracks without the tenorists, neither of whom impress me as anything out of the routine in this end of the music. My knowledge of jazz in Turkey doesn't extend much beyond Burhan Öçal, though I know the art form is very alive there. Here, my favorite moments are when the musicians (presumably the Turks) incorporate aspects of their native musics (as in "mouths"), playing down the individual, jazzier tendencies in favor of a broad group sound. As with the above release, this is kind of hit and miss for me, here falling into a pretty standard, humdrum efi kind of improv, there casting that aside and attaining a gripping, deeply musical melange of cultures.

A series of electronics pieces which seem to be largely, if not entirely, voice-sourced. For some listeners, including yours truly, this can often lead to a certain amount of discomfort, unfair though I know it to be. I find that it seems to be very difficult to, if one is going in that direction, abstract the voice enough to remove the emotive baggage that's inevitably attached (Ami Yoshida, often enough, for example). I far prefer it when the musician in question deals with the voice as such, emotion and all, which tends to lead down the pathways, however skewed, of song. That's just me, YMMV and all.

Ammann, as I understand it, refers having his audience in the dark, wearing sleeping mask, centered among speakers. I can see the music working well there, in an INA GRM kind of way--the electronics themselves are often gripping and always solid enough. Myself, I'd still, I think, be put off by the vocal modulations. They're often whispered in a manner that comes off as theatrically menacing and, when elaborated or otherwise modified by the electronics, well, I can't help but be transported into gothic movies and the like. Even within these strictures, I don't find enough variation or, ont he other hand, burrowing into a given vein at length, to satisfy me. SOme samples are up on Ammann's site below, however, so you can hear and judge for yourself.