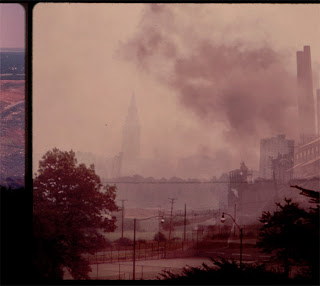 I knew I hadn't heard all that much music from Baron over the years but also knew that I liked what I'd heard and that his range had been considerable enough that I had little idea what to expect. Looking back, it seems I first encountered him as part of a saxophone quartet with Bertrand Denzler, Jean-Luc Guionnet and Stéphane Rives on a 2007 recording also released by Potlatch, "Propagations". Check out this lengthy discussion on Bagatellen wherein Damon Smith and the never-disappointing Uli have at your poor writer for a while before the conversation veers into the morality of downloads, etc. (ah! 2007!) Perhaps the duo with Luc Blairon, "Narthex" (again on Potlatch) was next, along with "une fois, chaque fois" on Theme Park and finally, the supremely mysterious "∩" on Cathnor. They're all, in their idiosyncratic ways, very good.

As is "Hidden Tapes". I'm not sure if "hidden" has any special meaning; I tend to think of the sources as found tapes from his personal library, apparently dated if the titles to the cuts are an indication. In any case, one of the overriding impressions I get from the five pieces is a decided sense of composition. In one way, I'm reminded of the INA GRM school of tape composition but the work here is far less stylized, much grimier (thankfully) and forceful. While most of the sounds come across as noise/abstraction, here and there are glimmers of the recognizable: snatches of music, voices, a brief pulse. Were I to listen to the third track blindfolded, I would have thought it was an excerpt from a Graham Lambkin work. Describing the music otherwise is a bit tough. It's more often fairly dense than not, though there are portions of near silence and a strangely poignant few seconds during "2013 - a happy summer with children" where one hears the simple extraction and insertion of a cassette tape. As said, "noise", in the form of, I imagine, corroded and otherwise damaged tapes through which you can discern faint traces of the intended subject, predominates, but there are also mysterious and beautiful hums circulating beneath, often just within the range of hearing, emphasizing the ghostly nature of the sources. The last piece, "1965-2013" (Baron's life?) begins with some strummed, rockish guitar, quickly squashed by vaguely malevolent electronics, very Lynchian in feel but also imparting a strong sense of personal meaning to Baron, even a kind of sadness that reminds me, though the music is very different, of Lescalleet's "The Pilgrim". A melancholy feeling of time having rushed by. A common enough emotion but expressed, via abstraction and a certain amount of distance, very movingly here. Fine work.

That old Bagatellen thread is hilarious. So glad that sort of thing doesn't happen any longer...

Hidden Tapes is the best thing I've heard in a long time.