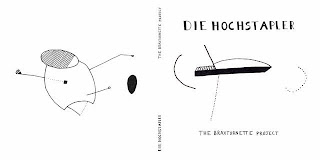 I love that "Hochstapler" translates to "impostor"....

A quixotic and, well, I guess pretty successful idea, at least on its own terms, taking compositions by Braxton and Coleman (admittedly, I'm suckered in at the start), learning them remarkably well and, more interestingly, staging them in a sequence that journeys from rigorous exposition of themes to freer variations to extremely open structures. In the accompanying notes, we read, "We don't copy them we steal them and restructure their ideas according to ours".

Part I includes four compositions from Braxton's 23 series 9A, B, D, E, all from the first two Arista albums) plus Coleman's "Peace", "Faces and Places", "Free" and "Change of the Century". I should say at the outset that, throughout this recording, these fellows do a remarkable job of nailing the melodic lines, really capturing the nuances. This, to be sure, is all well and good but we want to hear how their larger idea works. You get a glimmer near the beginning when the theme from "Peace" pokes its head into the improvisations on "23E", then takes over. Very nice and only for the briefest moment, when "23D" assumes control. So goes this section, cycling between themes, using the standard head/solo/head format for the most part. Quite enjoyable given the inherent beauty of the melodies and the ease with which they're tossed off, though conceptually not so challenging. Funny, I easily let the larger idea of this recording take precedence, but I should say that everyone involved here plays really well.

The second part expands things a bit, using pieces from Braxton's 40 series (B, F, I, L and O) and some mid- to late 60s Coleman works ("Good Old Days", "European Echoes", "The Ark", "The Empty Foxhole"--there's also a reference to "π"--was there ever an Ornette piece so-called?). It's an extended, 35-minute track and allows for superimposition of themes and, generally, has a much less boppish air than the prior portion. It definitely makes for a more expansive and more lastingly enjoyable endeavor, the motifs segueing in and out, the whole thing a very alive organism. As sprightly and punchy as the first section was, this approach feels more comfortable somehow.

Part III is the logical extension, venturing into collage structures and game situations using Braxton pieces from the 53 and 69 series and six other Coleman works, segments of the compositions emerging and receding, repeating, stretching and otherwise morphing. I found this the most satisfying expedition so far, the mass of jumbled sound now and then coalescing into recognizable melodic lines, decomposing, shifting to another line, free improv or something in between.

Finally, the octet tackles Braxton 348 and "Free Jazz". When they surge into the latter's theme following an engaging period of murkiness, it's quite exciting, the dual drums and basses then providing a rich, pulsating ground for the ensuing solos. But they show good judgment in not simply letting the music devolve into a string of solos, instead consistently arcing back into the Braxtonian sound world and using that to generate more Ornetticism. A solid job all around.

I remember a recording from the mid-90s called "Jump or Die!" by Splatter Trio and Debris, two LA-based ensembles. That was ok, this is better. Anyone with more than a passing interest in either composer, or simply interested in the current European jazz scene, should snatch this baby up. 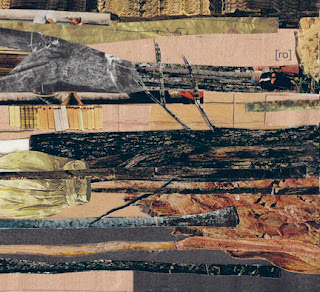 Yet another side of Lingens shows up here in a freely improvised duo with guitarist Buder with four pieces that vary widely in attack (though they're tilted First through Fourth Movements, indicating a connection). In the first, Buder (who I've not heard before) is in a kind of gentle Bailey mode with Linden sliding objects on his skins and adding plunks and soft chimes. It's quite gentle and pleasant, maybe a bit too much so. The second opens up a bit, using soft feedback at first and deep rubbing noises; spacier but holding together well, imparting a good dose of uneasiness. The shorter third section returns to the general world of the first but is much more concise and, to my ears, Buder is somewhere in Messiaen tonality, which is quite beautiful; lovely piece, soft and deep. The last section leaps to an entirely different environment, all harsh atonal buzzes and whispers, often low enough in frequency to generate uncomfortable vibratory sensations. Rough guitar strums appear, muddied in the distance amidst blurred rattling, gradually attaining a bleak kind of clarity by the track's end--a very effective conclusion that draws into question much of what preceded, not the sort of "narrative" that's often encountered. Good job.