One of fifty entries in this collection, made up of similarly formatted descriptions of site recordings realized by Korn and Riek from 2005 to 2012, subsequently erased. The CD-sized book devotes two pages to the procedure and some of the ideas behind it (notes by Georg Imdahl), then lists each recording, in blue text, one per page, in chronological order. The reader (the would-be listener) forms a mental image, visual certainly, perhaps aural, even olfactory of the place and time and imagines what the pair experienced. This is the second such collection, the first, published in 2007, follows the same structure, though with more notes.

It's a bit akin to Manfred Werder's works, I think, of which I've questioned the need to actually record them rather than "doing it yourself" and experiencing them directly. Here again, you're at a remove from the action, simply thinking about what Korn and Riek heard and felt on these occasions and then chose to hide. There's something magical about that. I dont suppose you'd want everyone doing it, but I'm very happy someone has. I like it a lot. 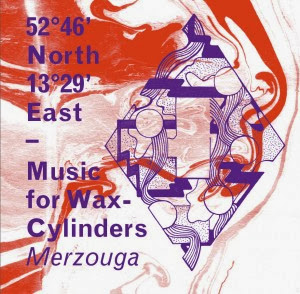 In addition to being a small village in southern Morocco, Merzouga is the duo of Eva Pöpplein (composition, electronics) and Janko Hanushevsky (composition and prepared electric bass). I'd previously heard their "Mekong Morning Glory" a couple of years ago, which I liked pretty well though thought it was a little too picturesque. Here, they've conducted excavations into the wax cylinder collection of the Berlin Phonograph Archive, unearthing eleven samples recorded from 1906 to 1931in Hungary, Egypt, Tierra del Fuego, Yemen, Abyssinia, Bali, Samoa, Switzerland, Mexico and China, weaving them into a kind of variegated rug augmented by subtle additions of their own. The recordings have inherent interest of their own, of course, and are presented more or less sequentially, always accompanied by varying degrees of cylinder hiss and scratch. Sometimes the contemporary additions (or, at least, what I perceive them to be; I'm not always sure) fit in beautifully, other times, I'd have preferred to hear the old recordings unaccompanied. But those ancient sounds, all of which are music-realted, are so fascinating--there's an example of the well-known Ramayana Monkey Chant, but all else was unknown territory for me--that it's quite easy to simply listen to the steady flow of them amidst the rapid, material "noise" of the wax and have a grand time doing so.