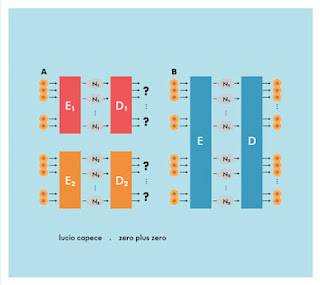 Six investigations from Capece in his first solo recording (hard to believe, but apparently true). I do often think of Capece as an investigator, someone who, with great seriousness, plumbs his arsenal relentlessly, searching out previously undiscovered aspects and, importantly, framing them within a compelling, absorbing context. He certainly does so here.

The pieces all involve different instrumentation, beginning with a sonorous and enchanting solo sruti work; admittedly, I could wallow in this stuff all day, those multiple, woody tones, so luxurious. It drones but also meanders (in a good way), leaking out fine tendrils. The title track features soprano sax with preparations. As mentioned above, this is one of those tracks that really has the feel of an in depth probing of his situation/implement. High pitches, often roughed, overlaying a kind of metallic scrabbling, ceding to hollow tones, each area or combination of areas lingered on for at least a minute or two, listened to carefully, gently elaborated on, ending with muffled, percussive bell-tones; really nice. The sruti box is brought out again for the next cut, combined with bass clarinet neck and walkmans, producing a series of low, plaintive moans like an abandoned, forlorn beast in a desolate, smoky terrain, harrowing.

Next up, a work containing my favorite hitherto unencountered instrumentation: "tuned backyard", heard in duet with "double plugged equalizers". The backyard enters late in the piece (lovely sound wherein the effect of the tubes through which the locale is recorded can be clearly heard) but prior to that the piece engenders some serious throbbage. Similar, in a way, to the first track, one can be lured into simply succumbing to the richness and losing oneself in the sheer, gooey plasticity of the sound, but there's more going on: fluctuations within the drone, many more strands than were first apparent great depth. A fairly short, simple and pristine sine wave work, kind of a very slow melody, pure and beautiful, leads to the final work, imho the most powerful one presented here, for bass clarinet "with and without cardboard tubes". Again, an investigation, her into the lower, cloudy cavities of the instrument, the fluttering, pulsed tones like some black, subterranean river. The throb dwindles to a quaver or two, gorgeously paired. You can hear someone who's gone into the Malfatti zone and emerged from the other side, enhanced and "permitted" to more actively engage, the lessons having been well-learned. A fantastic piece, one I can and will listen to many, many times and a seriously fine recording overall. Not to be missed.