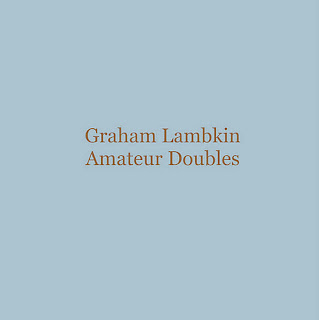 I first encountered Lambkin's work, as did many, I imagine, with the brilliant "Salmon Run" several years back, never having experienced his tenure with Shadow Ring. Subsequent efforts with Jason Lescalleet, on his own and in the three or four times I've had the pleasure of experiencing his live performance, he's pretty well cemented, in my head, himself as one of the more unique musicians around. And, of course, the term "musician" is highly suspect as Lambkin certainly pushes the boundaries of what one considers musicianship. Live, it's sometimes difficult to discern exactly what it is he's contributing while on record, his use of previously existing music, often to brilliant effect, raises questions of authorship that can be prickly. I suppose that's never been more so the case than with "Amateur Doubles". Which I love.

One opens the gatefold LP sleeve to a photo of the Lambkin family seen through the window of their car, apparently a Honda Civic. Graham is fiddling with something beneath he dashboard, his wife Adris Hoyos behind the wheel, a son in the back seat. This was the recording studio. Atop the dashboard are the two CDs that make up much of the sound source for the disc: "Pôle" by Philippe Besombes and Jean-Louis Rizet and "300 Miles Away" by Philippe Grancher, both Tangerine Dream-y, fusion-y 70s discs with mucho synth/electric piano action. What seems to have occurred is that Lambkin extracted some quite evocative and lovely nuggets from what I'm given to understand are otherwise unexceptional recordings and constructed a melange of sorts (on tape? you hear what sounds like cassette insertion at several points)) which he proceeded to play and record inside the car.

It sounds almost hilarious in one sense but, dammit, it works beautifully. The recordings dominate the soundscape (bracketed by a few moments of something else, including some flute practice at the beginning of Side One--though maybe that's also part of the source recording?) though they're clearly embedded within this somewhat claustrophobic environment, this small "room". Apart from the general ambiance of the space, you hear other elements including the chatter of children, presumably Graham's and Adris', some amount of exterior sound (though I daresay the windows were closed during this operation), various clicks and tappings and what sounds to me like Lambkin's low, muttering voice.

And it somehow all works, works pretty wonderfully. As with field recordings, I have to think it all revolves around choices made and how those choices synch up to the listener's taste, sense of structure, etc. Lambkin manages to rescue these pieces, on their own perhaps a bit sappy, by fixing them in this very real setting, by imbuing them with enough grain and grit so as to make them palatable, no mean feat. I can put this on and listen all day, dwelling on the multiple possible meaning of the term, "amateur doubles".

Incidentally, I'm not sure if this isn't a feature common to all clear vinyl, but there's a very cool optical occurrence one encounters when looking down at the spinning disc, the grooves appearing to go both "forwards" and "backwards" on the turntable. Trippy!

"I can put this on and listen all day, dwelling on the multiple possible meaning of the term, "amateur doubles"."

FWIW, the origin of the title is one of the track titles on the Besombes/Rizet disc, 'Armature Double'.

Thanks , a great article . Check out some more famous fonts that are updated every day at https://yofonts.com/