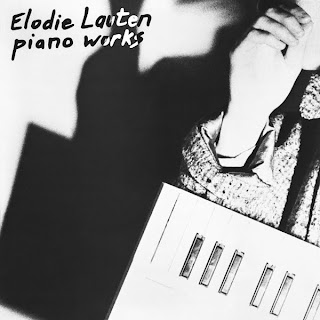 Lauten was born in 1950, some 12 to 15 years after the first wave of minimalists and her work didn't surface by and large until the early to mid 80s, so she's always stuck in my head as "second generation minimalist" along with people like Daniel Lentz and John Adams. Like Lentz, she's much more overtly melodic and playful than her predecessors which is sometimes good, sometimes not so.

This 2-disc set contains four works from 1983 to 1991. Disc One has two suites, Piano Works (1983) and Concerto for Piano and Orchestral Memory (1984), plus a brief Tango. The former is pretty rollicking, somewhere between Young's The Well-Tuned Piano (it's not justly tuned, however) and Charlemagne Palestine's lush elaborations. There's synth involved. both for textural accompaniment and some bass. It also has an improvisational feel; in his better moments, Jarrett in the 70s came close to this music.I wrote a while back about Ron Geeson's solo piano album, "Patruns"; there's a good bit of that flavor here as well. The second suite is in similar territory, at first maybe even more propulsively burbling, with Arthur Russell (cello), Peter Zummo (trombone), Voirabh (violin) and Ron Lawrence (viola) accompanying (and electronically enhanced). Sometimes, the keyboard almost bows out and the strings and brass edge into a Bryars-y morass (an attractive one). But overall, it meanders overmuch from section to section, not establishing any solid feel or theme, more like a string of unfinished ideas. The tango, though, with a vocal in French, is quite lovely.

Variations on the Orange Cycle is the most recent work (1991) and is even less in the minimalist vein than earlier ones (which are reasonably far afield themselves) though again one thinks of Young and even Riley in his more expansive, less rigorous moments. I've been listing many references because I find it tough to hear much I can specifically think of as Lauten in much of this music. I don't know that that's necessarily an awful thing as much of it is attractive and even beguiling, but I do often find myself hearing strong echoes of others (perhaps in some instances it's actually the reverse). Indeed on "Sonate Modale", a live performance for piano and tape from 1985, I could add Muhal Richard Abrams and "Blue" Gene Tyranny to the list. Here, the electronics, softly screeching and whistling are an intriguing offset to the ruminative piano. Once the listener settles in and accepts the dichotomy, it's a sensual and evocative journey.

All in all, an interesting set. Probably too "gentle" for both the eai crowd and the stricter minimalist fans but a damn sight better than Adams. IF work like Lentz' "On the Leopard Altar" appeals to you, this should be right up your alley.

before I read this blog I have gotten a old magazine that said "Lauten's opera Waking in New York, written on poems by her late friend Allen Ginsberg, was presented by the New York City Opera VOX and Friends 2004"22dd