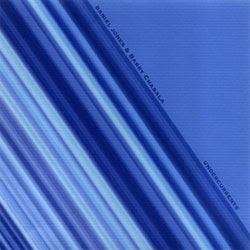 I take it this was a long-distance collaboration (Barry can correct me) but whatever, it's a real good one, my favorite thing thus far from Mr. Chabala as an improviser (his take on Pisaro's "an unrhymed chord" is outstanding as well). He has a bent toward pure, ringing tones, often high-range--I know he's a fan of "Evening Star" and I think it comes through--so having someone like Jones in tandem is just the right tonic with his rougher scrapes and rumbles. Four cuts, each strong in a different way, leaning in the agitated calm direction. There's an especially beautiful sequence near the end of the second cut, "Empty", where those clear guitar tones play against a distorted field recording with voices and maybe radio captures. Each piece has a natural ebb and flow, an intriguing enough outcome if their genesis is as intuited above. Solid throughout, "Undercurrents" kept me attuned and riveted; strong release. 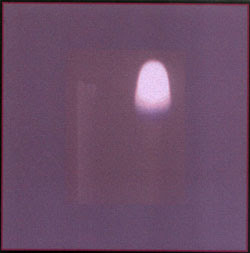 The last recording by this pair was a bit too tilted toward the efi side of things for my taste; this one's far more up my alley, much more expansive, much wider spaces carved out, particularly on the first of the two tracks. Once again Noyes, on percussion, (in New Zealand) and Chabala on guitar (in somewhat more exotic New Jersey) created their parts independently, "blind and layered", by which I take it without either's awareness of the other's output? However achieved, "Yin (The Shade)" is pretty much seamless, a rich, imaginative piece, varied in dronage both percussive and guitar-based and also evincing a wide range of clatter. The second cut, "Yang (The Squint)", incorporates far more silence--I take it this was a guiding parameter in the trans-world exchange?--and, with the plucked and struck approach largely taken on the respective instruments, falls more readily in the efi mode, quite effectively so, though I'll be damned if I don't pick up traces of "Moonchild"...

Both recordings are worth a hear.

hi brian, thanks for giving these a listen. you are correct in thinking these are both long distance collaborations of course. for 'undercurrents' daniel sent me some of his music and i worked with that as a base. the pure guitar tones are sprinkled in there for sure, but there is guitar all over the recording that blends into dan's sound really well.

for 'the shade and the squint' lee and i both recorded two pieces, "yin" is the first 2, unedited. "Yang" is the second 2, but in this instance we removed lots of things to create the space and give the sounds more room to breath.

thanks, glad you enjoyed them!

Big ups on Undercurrents, a grower, a valuable quality for me [a work enhanced by repeated listens].

I'm very glad that you enjoyed Undercurrents and I wanted to thank you for the kind comments - it really is very much appreciated.