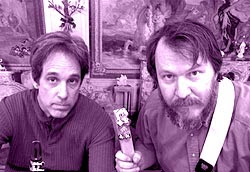 A couple years back, I went to see Rick Brown and Mark Howell out in Brooklyn at Goodbye Blue Monday and reported on it here, a very fun evening. Last night, Rick (that's him on the right; some readers may know his work in the post-punk band V-Effect and the later group Fish and Roses, among others) did a set at Issue Project. He's a wonderful, gentle performer, very comfortable in his own idiosyncratic way of singing and playing, an in-your-living-room, homemade kind of approach.

He did four pieces, beginning with an all-time favorite of mine, Partch's "The Letter". Rick has this wooden box, maple I think, kind of chest drawer-sized, that he straps around his shoulder and plays, this time, with soft mallets. It's quite resonant, great sound. His rendition was lovingly intoned, the sole accompaniment the beats on the box, very moving. He next performed a really fantastic little work that bordered on eai, using only static, a small 45rpm turntable and a cassette recorder (I think--my view was blocked), juggling the three spare elements at fairly low volume, each one clearly heard, keeping the music sparse and obscure, including shards of what sounded like a jazz-soul track. Great piece. The sole off-note was the following song, a political piece that was lyrically a bit clunky, though the use of an alto trombone with bari-sax mouthpiece, funneled through a computer program that regurgitated bits and pieces of it was interesting. He ended with a long, richly droning and thumping work (again including homemade percussion involving wooden boards and sheets of metal) that segued in and out of what turned out to be (upon researching the lyrics--I didn't know it otherwise) a cover of the Dream Academy's "It'll Never Happen Again" [I'm informed by Rick that it's actually a Tim Hardin song, apparently itself covered by Dream Academy], softly crooned in a Wyatt-esque voice, ghostly and effective.