Allowing that I'm coming from a position of extreme prejudice, it's nonetheless fascinating to hear new work from Keith Rowe and try to understand what it is that makes the music so unique, so more considered than the great majority of other music in roughly the same area. One obvious aspect is that he brings a wealth of ideas to any performance. Another, when it's a collaboration, is his enormous graciousness and a combination of deference and a kind of passive/aggressive manner of insinuating his ideas into the proceedings, often subtly enough that one's first impression is that his partner(s) are the ones driving the sounds, only later realizing that Rowe's enhancement of the event may have had as much or more to do with its success.

The two new releases on erstlive are fine illustrations of both his collaborative mode and, in the case of the solo recording, a rather amazing--if possibly problematic for the innocent listener--example of just how idea-packed his solo projects can be.

The discs were recorded on consecutive days at the AMPLIFY festival held in Tokyo in September of this year. Those familiar with Unami's work, at least that portion involving the deployment of small, mechanical toys, will have a decent idea what to expect. The light chittering of rapid-fire rhythms immediately evokes a childlike atmosphere (more so, I presume, if you've seen him in action, which I've only had occasion to do once) but Rowe quickly offers a counterweight with dark-tinged rumbles and crackles, a much-needed tension, throwing the toy sounds into stark relief. He makes intriguing choices throughout; several times when Unami's sound gets very dense and disquieting, even rude, on its own, Rowe plucks fairly clear, almost pastoral notes from the guitar--a very beautiful opposition of sounds [I'm informed that these notes were actually generated by Unami]. The performance seesaws somewhat between these sections where tension predominates and small pools of psychological unison wherein the musicians find momentary idyllic balance. One also has the impression that Rowe, in anticipation of his solo concert the next day, to some extent cycles through past techniques, a personal, historical inventory of approaches that he'd been thinking about recently.

All in all, it's a wonderful set, a great example of Rowe's ability to both meld and be melded by the situation in which he finds himself. This isn't to discount Unami's contribution by any means; it's more that one sense he occupies his own distinct world, one which he's happy to allow visitors into but is unlikely to alter his approach too much, which is fine. It makes for a more exciting pairing as long as the other half is able to accommodate and, as I think is often the case with Rowe, manage to get something of his own way without his partner's necessarily being aware. 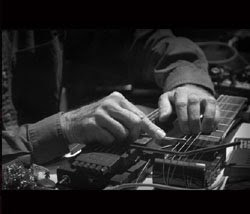 Jon had given me an unmastered copy of the solo Rowe set in early October and a mastered version a number of weeks back, so I've lived with it for a while. I don't mind saying that I was initially a little baffled by it, even put off a tad. As most interested listeners know by now, the performance involved the inclusion of four Baroque samples over its course, several minutes of Rameau, Mondonville, Purcell and Alessandro Marcello that emerge at discreet intervals throughout the set. I was aware, of course, that Keith had a great love for this area of music--he used the Mondonville motet as an example of musical profundity a few years ago when addressing an Electronic Music class at Columbia University--but their clearly calculated appearance here had something of a "glued on" quality, a collage-like effect much different from any random radio capture. I kept thinking of the kind of faux-Rauschenberg collages one comes across where examples of classical painting are connected, as it were, by abstract elements. To be sure, there were many moments of great beauty, including the samples--which are gorgeous--as well as wonderful brutalism right through the powerful ending, but as a whole, something nagged at me.

I should know by now, I suppose, that when Rowe pieces together something like this, there's likely far more going on that might be apparent on casual--or even not so casual--listen; he works in layers that, I daresay, you just don't encounter very often in this music. Happily, when he was in town in early November, I had the chance to go over the performance with him, crucially while watching a video of same. The work opened up like a rose. I'll defer from posting about the whys and wherefores of the piece as both Keith and Jon would rather the music be in the public domain for a while without specific descriptions of its innards. Suffice it to say, that there's a lot of thought behind exactly how it was constructed.

So I find myself at an unusual advantage here. Doubtless, many listeners will have no trouble with the performance as is, in audio format. But my own appreciation was greatly enhanced by watching the video with Keith's commentary alongside, more so, likely, than someone who was actually at the concert since some of the actions (such as a steel ruler, laid in front of his guitar neck, which was stroked so as to indicate time periods) were invisible to the audience. I will say that some of it involved a recapitulation of techniques from the previous 43 years, taking a fresh look at them.

So, take these caveats as you will, but armed with this knowledge, and acknowledging that I find Rowe's music and ideas to be almost unfailingly deep and fascinating, I'm afraid the Rowe/Erstwhile combo has again pulled off Record of the Year honors. Dammit. One of these days....

[Edit: I realized, belatedly, that I didn't really offer much in the way of description of the Rowe solo; you live with something long enough and you just assume everyone knows what you're talking about! Briefly, the performance more or less alternates between Rowe in his more isolated, "Twombly-esque" mode, scratching, twanging, etc. with extreme...delicacy (the word might not spring to mind given the rough nature of much of the sonics, but it's what I sense) and the four classical tracks. While those latter are playing, Rowe often comments, quite subtly, sometimes allowing the sampled music to stand alone for a while. Various "themes" of his own come and go, often related to earlier techniques of his that take on a nostalgic aspect not altogether different from the feelings evoked by the Baroque pieces. One theme is the helicopter-ish rumble, whose head pokes up here and there, ultimately overwhelming the proceedings at the very end. There are also a few radio captures; their relative naturalness--at least as pertains to Rowe/AMM--stands in contrast to the more formal introduction of the classical music; I initially found this a little uncomfortable, which I imagine is one of the points. Rowe has probed in that direction before, I think. He mentioned that, in the four-radio version of [N:Q], he might check the local listings and see, for example, that a Brahms string sextet was going to be aired at 10PM. The strategy he'd propose to the group was that they would, over the course of perhaps an hour, very gradually home in on that station, thus allowing Brahms to emerge after an hour or so, bit by bit through waves of static and noise. Not quite improvised, therefore, in something of the same sense as this performance. btw, I listened again this morning and the thing is still picking up steam in my psyche. Very amazing and deep piece.]

Robert Kirkpatrick, who was in attendance, wrote about these shows here and here and indeed touches a bit on Rowe's motivations.

Mark Flaum also attended and posted his observations at Paris Transatlantic
Posted by Brian Olewnick at 12/20/2008 11:11:00 AM

"The two new releases on erstlive are fine illustrations of both his collaborative mode and, in the case of the solo recording, a rather amazing--if possibly problematic for the innocent listener--example of just how idea-packed his solo projects can be. "

we're sure glad that guilty listners can lay it all out for us.

Nice quick take Brian, these are certainly something that will require a lot of time to absorb. One of the best part of the trip to Japan was that I was able to talk to Keith every day. I've said this elsewhere but too me I think that music that is really deep, that really holds up comes from serious and in depth thought. This is something that I think often is missing in a lot of abstract music - a lot of it is a thin veneer of interesting sounds over pretty much nothing (this is of course true of much music, but I'm more able to speak of this area). So for me something like AMM I think holds up decades later while some things that blew me away just a few years ago seem a little empty now (not all of course). So to bring it back to Keith, as we all know there is a tremendous amount of thought, conception, experience, history and yes meaning to what he does. I love too how open he is about it all, he had issues talking about what he meant and what he was trying to do (which I find rare in this area - perhaps because for so many there is no there there). I only touched on all we talked about in my review of that set, some of it I felt if he wanted out there it would be best for him to bring it up himself. Other aspects I wasn't sure how well I could describe it - I needed to have been taking notes!

Anyway these recordings have proven to be as strong as I remembered which is always great. In the solo set there is incredible low end that is unbelievable on my stereo - I hope all that listen have the ability to push some serious bass. I do have a bit of quibble with some of your take on the Rowe/Unami set, but I'll have to think about that a bit more. I'd sure like to see these videos sometime, do you any idea (or Jon if you are reading) what if anything is going to be done with these?

(also good these came out, prevented you from naming the mediocre 3D as record of the year ;)

first of all, thanks very much, Brian, really glad that people are enjoying these. I did some digging around on JC over the weekend, and I believe that's eight years running for a Keith Erst to be #1 on your list:

in 2000 (the first year I put out a Keith CD), The World Turned Upside Down was your #3 behind Nailed and Allpiano. not a bad run!

Robert, the video is just of the solo set. not sure if you knew at the time, but the French filmmaker who is making a film about Sachiko (on a similar timetable to Brian's Rowe bio, seemingly) offered to just leave a camera running overhead during the set. I have a DVD, if I can figure out how to burn a copy (maybe with your help), I can send you one with your next order.

also, Keith recorded an audio commentary over the solo disc when he was here, so I'll probably put that on the Erst site at some point.

Hey Jon - that'd be awesome to get a copy of I can walk you through the process for that no problem. I did that for Richard ages ago :) perhaps after the holidays when I'm back home?