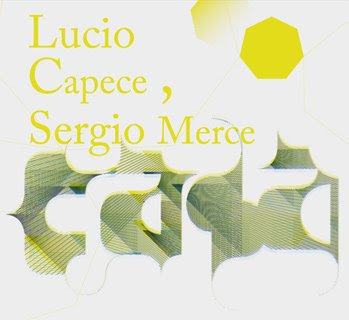 Over the last few years, Capece has become one of the musicians I most look forward to hearing, largely because of the fact that he seems to approach each project with several specific, wide-ranging and imaginative ideas. There’s always something going on in addition to two or more people simply sitting down and playing, as rewarding as that may be. Lucio was kind enough to recently send me four DVDs of performances in which he was involved over the last year and, while he’d prefer they not be “reviewed”, I’ll just say that each was extremely impressive in a different way and strongly whetted my appetite to hear/see more.

On ‘Casa’, he’s joined by fellow Argentinean Sergio Merce (a new name to me) for two forceful though serene pieces. On the first and longest, “Virar, virar”, Capece plays the sruti box (augmented with an electronic filter), a kind of portable squeezebox which I imagine is capable of a couple of octaves but which he lets abide in a fairly constant drone for the first half of the 30-minute work, what changes occur doing so via the filter. Merce manipulates a “four track portastudio without tape”, sounds generated via direct interaction with the instrument’s surface and use of its equalizers. The reedy sound of the sruti, wonderful in and of itself, acts as an absorbent cushion for all the prickly, clattering and whirring noises created by Merce. Midway through, they very slightly shift gears, Capece, while maintaining the drone, allowing it to mutate and phase in a more agitated manner, Merce at the same time apparently coaxing smoother sounds from his portastudio, resulting in the piece wandering into territory that, had he maintained his genius, Terry Riley might be investigating today. Beautiful work.

The remaining cut is a 7 ½ minute duet for bass clarinet (Capece) and tenor saxophone (Merce). Its structure (it seems to have been “composed”) is simple but very effective: Synchronous held tones, always softly played but not quite edging into full breathiness, held for 15-20 seconds with three or four seconds of silence between. The result has a certain loose regularity of pulse, but each “pool” is varied so one has the sense of experiencing natural phenomena, like a series of strata in limestone. Recalled Roscoe Mitchell’s wonderful “Tnoona” at points. Very moving in its concision and its poetic overtones. 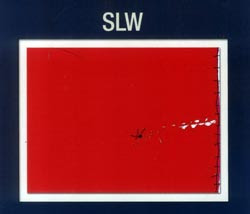 A veritable eai super-group with Burkhard Beins, the omnipresent Lucio Capece, Toshi Nakamura and Rhodri Davies (why SLW? No idea.) One improvisation, about 56 minutes. The first couple of times I listened, not too much was really grabbing me. It seemed to fall on the wrong side of that ephemeral line between haphazard and random (the latter being somehow more interesting). Not unlistenable, of course—not likely with these four—but a bit routine, a bit without any reason for being I could grasp. Several listens later, I’m still not entirely sold, though there are certainly parts that cohere beautifully, even if it’s only because of the introduction, for example, of throbbing low tones some 25 minutes in. Sometimes I think such deep pulse are the grooves of eai and feel a bit guilty about readily succumbing to them…From that point until the close, SLW holds my interest but I’ve yet to be as knocked out as I might have hoped. I hold out the sizable possibility that I’m missing something, though. formed 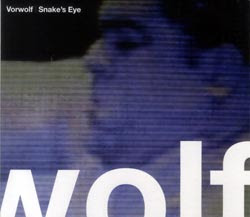 I’m all for percussion duos. Something about the configuration triggers some excitement hairs, more so when it’s obvious we’re not talking battle royale thrash-outs, though the sumo imagery and track titles references gave me pause here. Vorwolf, as one might suspect, comprises Michael Vorfeld and Christian Wolfarth, I believe engaged in an entirely acoustic pursuit on this occasion. Far more rubbing and bowing than tapping, the pair is capable of generating some rich, expansive work as on “Illegal Technique” and several other tracks. It’s one of those recordings where I really feel I’m missing something not being in the performance room, able to move about and bathe in the sounds. I think I might have preferred longer pieces rather than the seven mid-length cuts here but, as is, it’s still solid and enjoyable. formed
Posted by Brian Olewnick at 9/06/2008 09:38:00 AM

SLW is shorthand for Sounds like water Brian, as I understand it a semi-serious in-joke.

I'm with you pretty much Brian on the SLW - its got nice sounds and some interesting moments but all in all I think it's rather thin gruel. After a number of listens I had the thought that in this case perhaps the quartet was too safe that any given trio of these four would probably have pushed these guys into a bit more interesting territory.

The project was supposed to be performed inside an old swimming pool in Brussels, when it started. Finally it went somewhere else, but we kept the name. Anyway the idea of playing inside an ex swimming pool was inspiring, like thinking sound in the way you perceive water when you are inside a swimming pool