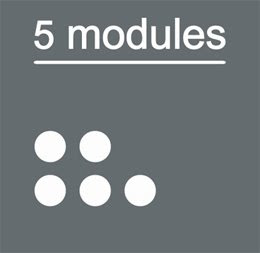 For the final entry in this generally excellent series, we're presented with three compositions, one from each participant (Ryu/clockworks, Choi/CD player, Hong/turntables). "Musicboxxx" involves all sorts of mechanical rhythms, sounding a bit like the archetypal clock factory at noon, the layers of regularly paced clatter interspersed with enamel-fracturing squeaks. Not what I wuold've expected, but oddly enjoyable. "Pieces" continues this rather surprising rhythmic obsession but in a less regular, monolithic manner, aflutter with beats of various timbres and speeds, none overtly related to one another, before breaking down into a slightly more chaotic mix, still rhythmic but less regular. A silence, further dissolution of pace. A silence, a blip. Nice work. The last track, "Feedback ring for three electric players", contains rhythm as well, though at the onset it's far more subtle and elastic, as swatches of feedback emerge and recede amidst static and clangor. Eventually, the delicate quasi-rhythm of a small, hard object being swirled about in a metallic bowl is heard, soon overcome by feedback drone and a muted alarm clock buzzer. Strong piece, my favorite of the disc.

The above was written before viewing the composition notes (here). Interesting, especially with regard to the second piece and my perception of dissolution. Considering where this series began, with some extremely fine and adventurous music situated at the hyper-spare end of the spectrum, the final installment is surprising but no less fascinating and forward-looking. Recommended! 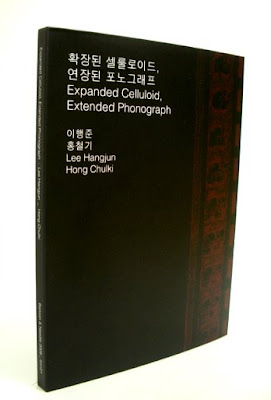 Two videos by Lee Hangjun with sound by Hong Chulki (turntables) plus an extra live performance.

Both of Lee's videos use a similar format: twinned screens displaying generally abstract imagery (though often infiltrated by footage from various sources) based on film stock that appears to have been treated chemically including, one guesses, by "natural" processes like heat, elemental exposure, maybe biological growth) then reprocessed digitally. The film origin manifests in that upward movement I've mentioned before, something I find a little distracting. The images are usually formally related to each other, at least by a like corroded quality, occasionally more directly via reflected, out-of-phase use of the same image. The overall tone is in the brown/ocher range with flashes of other colors and sometimes opposition of, say, bluish and flame orange aspects of otherwise similar footage (very effective). There's an enormous sense of speed enhanced by Hong's brutalist turntable, especially in the first piece, "The Cracked Share" (think Yoshihide at his most violent); Hong's work is pretty great throughout. The second piece, "Metaphysics of Sound", is somewhat more contemplative, the imagery revolving around film sprocket holes, Hong using actual records as a prime sound source (how old-fashioned! ;-)) and perhaps all the more effective for pulling back a tad.

Do I like it? Well, yes but most often when I'mm able to really immerse myself, something difficult to do via TV screen. Imagining the works performed in a larger room, the images projected on walls (perhaps being run in duplicate so one is surrounded), I think it would be quite the experience. The supplemental track gives hints of just that and, again to the extent you can place yourself in situ, it appears pretty fantastic.

Gotta say I find your thoughts on the new Five Modules rather funny since I LOVE the first two pieces and found the third absolutely unbearable on my first listen!

Still gotta watch that DVD though.

I really like all three pieces, its a great disc. I can understand why the Chulki piece might grate Richard but I like it, its kind of a noise piece in reverse, starting loud then getting gradually quieter.

In some ways, I wish I had time to more deeply investigate the current noise scene, even if I've been put off by a substantial portion of what I've heard (and had a singularly unpleasant experience at the one No Fun evening I attended). Obviously, there are going to be gradations within the genre and I've heard enough that I do like (Colley, etc.) that I'm sure I'd find more, but it's just a time issue.

Even with Chulki at his most extreme, I sense a concern with touch that is rare enough, whatever the surface aesthetic, and that's often enough for me.

you need to be more selective about it, going to a few random No Fun shows like you did isn't very likely to result in transcendence, and in fact is much more likely to result in irritation, as it did. Yuko and I picked one or two sets each year and had some pretty incredible results, but I question how much of interest there will be in that fest moving forward, especially if they don't find a better venue than the Knit.