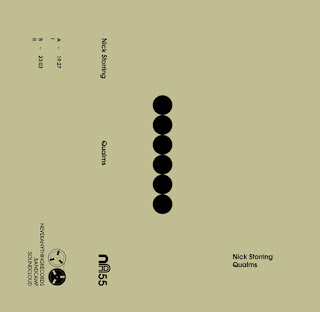 A wildly entertaining if difficult to pin down solo venture from Storring. 'Qualms' is a single piece, spanning both sides of the cassette, on which Storring wields cello (electric and acoustic), other strings including guitar, keyboards, a vast array of percussion and more. The music has one foot in a kind of post-In C minimalism--there are moments that almost sound like they might have been lifted from a variant In C performance, in fact--and several others  (it's at least insectile, if not centipedal) in adjacent areas including one that owes something to Southeast Asian traditions. The generally shimmering percussion, all light bells and transparent wooden tappings, rolls over liquid, string-generated drones, nodding in passing to Balinese and Javanese music, even evoking Laotian mouth organ music at one point, but joyfully moving to its own rhythms and harmonies. On the one hand, it's kind of steady-state but within 'Qualms' are any number of sections and shifts, fades and re-emergences, dreamlike. There's generally a pulse (the piece was written to accompany choreography for Yvonne Ng), at least implied when slowed to a breathing pace, but often enough up front, always airy and fluttering, never remotely leaden; this is particularly the case on Side B, during the episode that's most reminiscent of the Riley opus.

Overall, 'Qualms' is an intoxicating pleasure, offering both a surface beauty and a wealth of fascinating details to investigate. Well worth hearing.

Very interesting blog. Alot of blogs I see these days don't really provide anything that I'm interested in, but I'm most definately interested in this one. Just thought that I would post and let you know

It's amazing in support of me to have a web page, which is beneficial for my know-how.
thanks admin

I really like the look of your site. I am very grateful for sharing your knowledge with us. thank you.
liga asia
fenomena alam
hidup sehat
wisata kuliner
maniak gamet
info selebritis
berita terkini

I really like the look of your site. I am very grateful for sharing your knowledge with us. your article is very good and thanks for share.
rakyat merdeka
berita artis terkini
jadwal bola hari ini
sbobet euro
berita trend indonesia
aplikasi android

I really like the look of your site. I hope this information is useful. Come see my site and thank for share
indo viral
seleb trend

There was a re-occurring theme all week long Agen Poker 88. Managers in every department are hungry for data that
will give them Poker Pulsa improved insight into their operations, and they’re frustrated with the difficulty