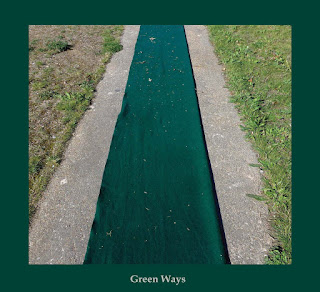 Graham Lambkin doesn't make things easy for your hapless reviewer. More than most practitioners in this general area of music, Lambkin, both on record and live, can appear almost artless, haphazard, indulgent. He's not the one you'd take your skeptical friend to see perform. The thing is, most of the time what he does works and often enough works fantastically. There's the old line about Thelonious Monk, "He even walks musical." It's a subjective thing, to be sure, but there are certain musicians who, to my ears, have such an inherent and deep musicality that almost anything they produce sounds good. Monk would be a fine example; Don Cherry, for me, is another. In visual art, it's something I think about when viewing Rauschenberg or Twombly: everything just, at the very least, looks good. Lambkin has something of this as well.

I'd only previously heard bits and pieces of O'Dwyer's work, organ-oriented music dealing with extended tones and shifting environments. I may well have missed other aspects of her music but the current release certainly fits comfortably within parameters established by Lambkin, which is to say "casual" field recordings with often woolly sound sourced from the mundane. It's difficult for me to separate out O'Dwyer's contributions from Lambkin's, though likely not so important. But even from someone who released a double LP of prog CDs playing in his car, this one pushes things. For me, it succeeds wonderfully, but be forewarned.

It's a double CD, divided into tracks (17 of them) and seems to be thematically based upon Lambkin's move to O'Dwyer's home country of Ireland. It opens with vague hums, shifting to forceful blowing sounds, back and forth, the humming morphing to primal, almost-grunts, an odd proto-language. Slaps, skin on skin, hardcore patty-cake, extremely sharp. These slaps transform disconcertingly into applause from a smallish but enthusiastic crowd--was the preceding a live performance? I don't know...Slaps reappear, this time hitting water and lead to notes on a muted, possibly ancient piano, struck metal (all in a blurred haze) and then a recurring theme--a conversation with a farmer (?) discussing plants. It sounds like the microphone is regularly brushing against rough material--denim or corduroy--in a rhythm that implies walking; an amazing sound-field between that and the voices (O'Dwyer and an older man). The (more or less) title track. 'Greenways', perhaps comes closest to an electro-acoustic composition, with subtle squeaks and bleeps mixed into a variety of overlaid field recordings featuring running engines, quite strong. A spare musical interlude, oddly titled, 'Laughter, Laughing' is heard, a low string--guitar? harp?--is plucked repeatedly, quickly. A public gathering that seems to be a memorial of sorts, super-immersive as if the listener is nestled in the front pocket of Lambkin's shirt. The disc closes with a man discussing old Irish history, knives, Vikings and metal to appreciative murmurs from our pair, pouring drinks, banging about--very intimate--the man breaking into song, 'Carrickfergus' if my research is correct.

Disc Two continues in the same scene, Lambkin and O'Dwyer joining in. An accordion--or squeezebox of some kind--surfaces on 'The Old Brigado, accompanied by jangling metal, in a sort of fractured jig, again with the harsh hand claps. Things remain suspiciously musical with the soft, gracious piano introduction to 'Down by the Sally Gardens', albeit paired with snuffling, cows and other woozy ambience. Singing cows (somewhat echoing those hums from the first track on the other disc), dripping water, abruptly interrupted by a shrill dog. Another Irish tune on a whistle amidst an outdoor crowd, discussion in a field between O'Dwyer and, I think, the same fellow who talked about plants, discussing capstones and tombs, bats and swallows. A small child singing, a plane overhead, a squeaky swing-set (?), cars, this focussed, curiously chosen eddy of sounds. Our singer returns on 'Beeaf for the Craic', pausing and commenting, struck matches heard; very moving and, again, intimate to an almost uncomfortable degree. 'Night Music' is the longest track at some eleven minutes and, for me, the most impressive, a mysterious layering of dark sounds, notably some roughly rubbed metal, as though someone is bowing a large piece of corrugated steel, motor engines, unnameable scratchings and scrabblings and much, much more. A piece of great power and presence and all the more inscrutable for that. We end at a table, friends toasting each other over drinks, alien buzzes flitting about, talking relaxedly about tobacco and catkin, the recording clipped and repeated at a point or two. It ends mid-sentence.