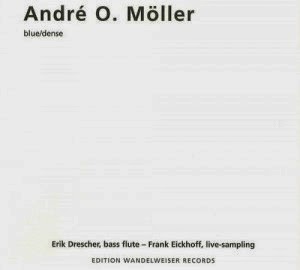 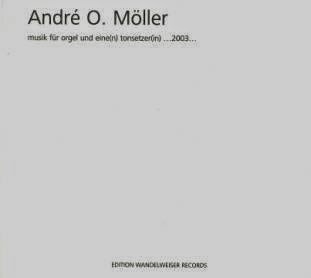 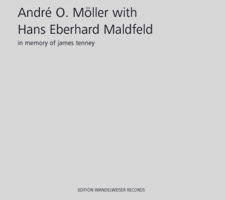 Somehow, I'd managed to be unaware of the work of Möller, a situation happily rectified via these three release, one each form 2004 and 2007 and one newly issued.

"blue/dense" (2003) is for flute (Erik Drescher) and live sampling (Frank Eickhoff), in four sections lasting between 16 and 18 minutes, each preceded by a minute of silence. The "musical math" is beyond my ability to comprehend but, for those so inclined, "this piece uses 17 tones in whole-numbered proportions to a virtual fundamental of G" (25Hz)". What one hears, after the silence (which feels very solid) is first, a single flute tone, pure and held, followed by irregularly occurring others, apparently as many as 28, forming a deep and mellifluous river, always shifting, some of the near convergences in pitch generating interference patterns, the whole sounding wonderfully warm and complex. Per the liner notes, there's amplification involved and it often sounds as though there must be electronic manipulation going on, but I'm not so sure. The pieces, while sharing an overall sound and sensibility, vary significantly form one another, perhaps insofar as which tones are "favored", perhaps with regard to how the sounds are amplified. Despite a different approach to sound generations, the result is sometimes not so far from that achieved by Eliane Radigue; fans of that composer will find much to enjoy here. Placing one's head between speakers and playing at volume provides a multitude of aural thrills in addition to the music's essential beauty. Great stuff.

"musik für orgel und eine(n) tonsetzer(in)...2003..." is a 73-minute work for organ, played here by Eva-Maria Houben. It involves just intonation and, again deferring to Möller's technical acumen, only uses "those frequencies of the organ sound that have close to whole-numbered ratios (+/- 6 cents) to a fundamental (in this case C' at about 32 Hz)". It begins without a fantastically churning, hyper-dense and rich chord, something one could simply loll in forever. About five minutes in, however, there's a bright splash of a chord, brilliant and surprising, which adds a whole other realm of possibilities. It's just an enormity of sound, filling every nook and cranny of one's aural space, enveloping. Möller credits Charlemagne Palestine as an inspiration and yes, you can hear that but there's more power here than in anything short of "Strumming". You begin hearing all sorts of things buried in there, most of them invented between one's ears; I have a distinct impression of a choir of double reeds á la the Master Musicians of Joujouka. Just as it's, arguably, becoming too much of a good thing, it downshifts at 28 minutes, pools there for approximately the middle third of the recording, Houben again sending out subtle tendrils almost below sensory awareness, sinuous continuos writhing just below the surface. At 58 minutes, instead of surging back, it recedes once again, diminishing to almost a single, breathy note (though there's a thin haze of surrounding tones). The pool image redoubles, the ripples, echoing, very slowly subsiding, eventually into silence. While being very dubious about categorizing it as such, in the subset of organ-steady state-long form, this might rank right at the front of my favorites, ever.

The tromba marina is a single-stringed instrument, played with a bow, occasionally looking like this: 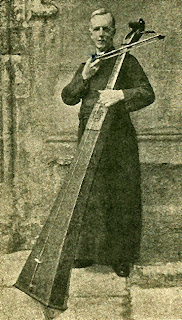 For "in memory of james tenney", in four parts, Möller and Maldfeld each wrestle with one such beast, using instruments from the 17th and early 18th centuries. And f it's grain you want, step right up--this thing, especially Part I, sounds like the bow is severely serrated, close to being able to saw wood. A huge rumble that encloses myriad tones high to low. Think of a Radigue cello piece with your head inside the cello. Part II varies the attack a bit more, relatively smooth strokes coexisting with the rough; there's also the occasional pluck. It's dreamier, more liquid. There are moments when I'm reminded of the early, excited strings work of Arnold Dreyblatt. You can hear many of the brass-like sounds the instrument is capable of here, the pair sometimes sounding like a small sea of muted trumpets, pretty amazing. It's like a lost 60s Penderecki work for brass ensemble....but better. Part IV (the third section is absent) is a short, two-minute piece, almost a song, very hesitant and lovely. The final portion, subtitled "when eight is seven", is also far less steady-state than the first, shuttling quietly (though often quite deeply) from form to form, hyper-low growls wending through a panoply of mid-range, barely sustained tones, edging into silence, emerging elsewhere in the stream. It feels less sure of itself, more troubled, a welcome counterweight to the (strong sand beautiful) confidence heard elsewhere, both on this disc and Möller's earlier releases. It's wonderful work, very unique, all of these recordings (as far as I can tell representing Möller's entire recorded output) making me very anxious to hear further music from him.