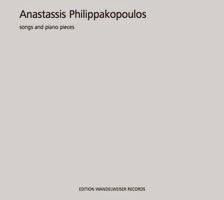 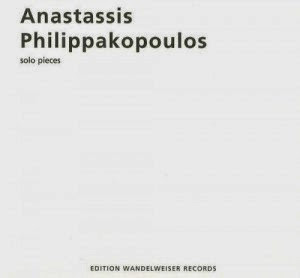 I'd heard some music by Phillippakopoulos as performed by Dante Boon in Amsterdam this past November, but these are, if I'm not mistaken, my first contact with his work via recordings and a very happy meeting indeed.

"songs and piano pieces" is a short disc and simply structured. Two solo flute works (one for bass flute) bracket a set of four solo piano compositions. "song2" (2008), with Katrin Zenz on bass flute, cycles through sets of four calm, mellifluous, creamy notes with silences between. The pitches in each set vary with the durations (always?) increasing from note to note, the final one lasting the longest. Very simple and beautifully luminous with a great sense of near self-similarity. I think of raindrops on a window pane in pearly light. "four piano pieces" (2005-2008), performed by the composer, are also structurally interlocked in a clear manner, each portion lasting between two and a half and four minutes. The first and third are akin, the former consisting of repeated sets of two chords, one low and cloudy immediately followed by another mid-high and brilliant and then, after a couple of minutes, two long-held and lovely middle range chords, the latter a kind of very slow melody made up of quiet, lingering chords, sustained until they fade, then a more rapid, though still calm and pensive series of individual, back and forth tones. The second and fourth present more sinuous melodies, spare and simple, but carrying a trace of the Mediterranean, perhaps Greek via the Arab world (maybe recalling Satie's Sarabandes?), each glimmering and jewel-like. "song 6" (2010), for solo flute, uses sets of three note patterns, not dissimilar from "song 2" in one sense--the same, lovely serenity--but being pitched higher, containing a slightly more plaintive aspect.

"solo pieceso is an earlier release, the recordings having taken place from 1998 - 2005, but it occupies similar territory: Three pieces for winds (bass flute, bass clarinet and oboe) and two sets of piano works. "tragoudi" (2004), once again with Zenz on bass flute, is a gorgeous lament, lush but reserved, "onissia" (2002) (Yannis Samprovalakis on bass clarinet) also carries an air of sadness, perhaps more so given the more mournful nature of the instrument while "syrna (2000) with Kostas Tliakos on oboe really gets keening. All three are decidedly songs; one could easily imagine them sung. All three are also somber and beautiful. The first set of solo piano pieces, again performed by Phillippakopoulos is in four sections. Like the above set, the short portions vary, an initial bright, almost strident chord dissolving into haze, rippling quiet melodies emerging, suspending, dropping into a brooding, dark four note repeated sequence and concluding with a vibrant spray. "piano 3" is the longest work from Phillippakopoulos on either recording, the thee sections covering some 23 minutes. Part one is contemplative and heavy, wonderful woolly, dark chords progressing in an almost stately fashion, leading to a more transparent second section, four note patterns like water drops off of a branch into a pond. In keeping with his apparent habit to end these series in rather dramatic fashion, we once again hear dynamic bursts, bright chords held, then reduced to quieter fragments, all occurring clearly limned in space, no obfuscation.

I'm quite glad to have made Phillippakopoulos' musical acquaintance and greatly look forward to hearing more music. In the meantime, hie yourselves over to Wandelweiser or Erst Dist and give a listen to these.