I realized that since I have several items pending review that have been sent to me electronically and since I have access to speakers here in Asheville, I can do a few reviews while on my US vacation, so.... 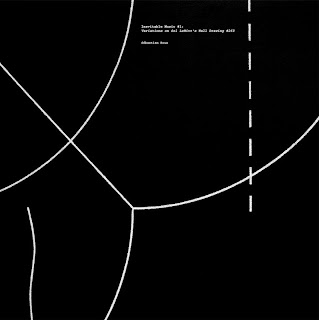 Future Audio Graphics deals with interdisciplinary projects, in this case including music from Roux based on (or translated from, in sound) shapes used in LeWitt's referenced wall drawing and a commissioned essay by Cluett.

I've always had a bit of difficulty with LeWitt's work, rarely being able to settle into the frame of mind where the visual manifestations of (what I take to be) his precise instructions registered as more than a superficial appreciation of the resultant forms. No doubt my shortcoming, having to do at least partially with not having spent enough time and study on the matter. A few years back, there was a multiple sculpture installation of his at City Hall Park in downtown Manhattan which I walked past each day to and from work. Again, I initially found the works opaque; cooly formed and clear but hard for me to apprehend beyond the basics that were up front and in one's face. Little by little, one of the pieces, a pyramidal work composed of (more or less) cinder blocks in which each level had a reduced perimeter and an expanded height, drew me in: 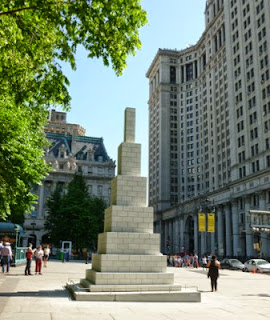 Something about its odd grace, the contrast between that grace and both the materials and the blatant progression of its form began to appeal to me. More than his wall drawings, which I'd seen at DIA and elsewhere but hadn't really managed to connect with. As the title of this disc indicates, a LeWitt drawing (or the instructions thereto) forms the basis for Roux' set of elaborations, using various sine waves, square waves, etc. In his essay, Cluett notes that "Roux also runs the risk of the same failure, of losing the ideas of LeWitt to the pitfalls of translation as a mere exercise in execution." which strikes me as an interesting field of potential problematics since, after all, executing an exercise is largely what's occurring; how to transcend that? (or does one strive to do so? Might one be content with list-making à la Tom Johnson?) Cluett goes on to describe in some detail the contrasts between visual and audio interpretations of LeWitt's instructions and particulars of the recording, ending with the observation that "Roux allows the audience to become aware of being aware and get lost in the raw flow of material."

There are seven tracks, the first six of relatively short duration (0:41 to 5:32), the last a lengthier piece lasting some 16 1/2 minutes. In keeping with the methodic aspect of the work, each track is introduced by a voice, female, sounding detached and almost synthesized, describing the elements used for that cut: the type of tone, the pulse, the ascension or descension, etc., followed by the realization. It's easy enough to make a mental comparison with a LeWitt drawing; the twenty shapes used are included on the sleeve design. On the first six pieces, one hears fairly simple, discreet elements, very clear and defined, being set through their paces, essentially the number of possible variations within a given time frame. Depending on the elements chosen, extra-musical associations automatically come to the fore, whether the plaintive wails of the ascending and descending pitches in "Variation 2" or the jauntiness of "Variation 3". The more often I listened, the more I was drawn in (not unlike my experience with the City Hall Park sculpture), though there was still something a bit too clean for my taste, not that I could reasonably expect messiness on this type of stage. Except that this occurs on the final track. Largely as a result of using sound elements that (I think) are derived from object-recordings as opposed to sines, including a rattling, ceramic sound, a whoosh, a vague, metallic echo, etc. There are put through similar paces, though for a greater duration and using longer intervals (five seconds). These changes create an enormous difference for me, opening up the space drastically, allowing each element some "breathing room" in which to vibrate. A marvelous, unique piece that does, for this listener, transcend the instructional. Inevitable perhaps, but also surprising.

A fascinating release, very different and very much worth hearing/reading.