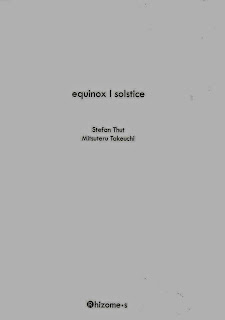 As far as I can tell, the structure of this piece (a score is mentioned) is simple enough. For exactly one hour on each of the four solstices/equinoxes of 2011, Thut and Takeuchi recorded their surroundings, the former in Solothurn, Switzerland, the latter in Kobe, Japan. From these recordings were extracted 75 minutes each, divided into three "Cycles", each of these quartered in turn, Thut's contributions on the right channel, Takeuchi's on the left. There may well be more to it than that but unlike, say, the recent "detour" from Toshiya Tsunoda and Manfred Werder", I don't get the sense of additional layering nor of post[event composition. I could, of course, be missing something.

On the one hand, as with many of Werder's text pieces, while I appreciate the underlying idea (and corresponding actions of the participants), I often question the necessity of recording the event for others to hear; I usually feel that doing the action is what matters, not experiencing it second hand. Additionally, at least in the US (I imagine elsewhere) the calendar events equinox and solstice carry a ton of mystical baggage that engenders, in me, extreme wariness. That said, simply sitting and listening to the sounds of this effort, bearing in mind only the knowledge that two recordings were done thousands of miles apart at the same moments, is very rewarding. The range of sounds isn't spectacular--birds, urban life, water, etc.--but everything is lovingly recorded and the
(happenstance?) overlapping yields contrasts and tensions that provide small tingles of pleasure. Bits of "drama" occur when a large bus or truck engine roars through the scenery, but it's the background haze that seems central. The final six minutes contains some very beautiful water drippings with birdsong alongside that subtle hum--a fine conclusion.

A good recording, though I retain that nagging part of me that says, "Don't listen. Do it yourself". 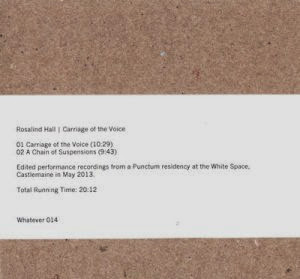 Rosalind Hall - Carriage of the Voice (Avant Whatever)

I'm always interested to hear attempts at fashioning a new language for the saxophone though am by no means often sanguine about the results. I often admire the efforts though the baggage is stubbornly resistant. One possible avenue, a rather subtle one, is to think about the instrument as simply a vehicle through which to transmit one's inner workings, psyche to gut. Well, sure, you'll say, everyone does that. But there seems to be a shade of difference to the way, as in the example here, a musician like Rosalind Hall goes about it. In the two pieces here (brief, each around ten minutes long), Hall does an excellent job of casting the saxophone as a conduit between her breath and voice and the room in which she's playing, the latter, at least seemingly, embodying most of the sound.

The disc opens with a speaker-shaking rumble. I've no idea if Hall uses mics to generate a kind of feedback (à la Butcher) or otherwise uses electronic enhancements; it sounds as though it's being recorded in a structure whose walls are threatening to crumble--pretty impressive. There are guttural breath sounds whirling in and out and eventually feedback-y tones, but the overall effect is one of hearing Hall's chest cavity. As long as she dwells in this area, I have no problems with the music. Inevitably, I suppose, recognizable saxophonics enter the picture here and there and, fairly or not, carry with them vestiges of past experiences and expectations. It's a tough job! But Hall does really well here. These are "edited performance recordings" so I'd be curious to hear more complete sessions, but from the taste offered here, she creates music that should certainly appeal to fans of the above-mentioned Butcher and, in fact, pushes things a step or two beyond, hewing closer to the bone, creating music that's more troubling, a good thing.