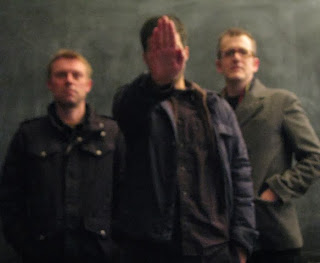 Not the cover from the disc, which is simply the large, white number, "168" on a black ground, but a photo of the reclusive trio from the Entr'acte site...

I guess this has been out a little while though I only heard it recently, a serendipitous occurrence as I'd read nothing about it and part of its charm, especially for those of us who've followed Haptic over the years, is the unexpected character that greets you upon its beginning and maintains throughout with just the slightest tinges of elaboration and perturbation. It seems like (and I've since read statements to the effect that it is) highly amplified sounds from still, empty rooms, presumably several of them overlaid. This is enough, really. It/they have their own rhythms, general surges in, perhaps, distant traffic and the comings and goings of high, electric whines perhaps from the wiring in the walls or appliances and much more. It's a great landscape, endlessly interesting, a surface gray that reveals an immense range of color.

During my first listen, I was happily luxuriating in this when I heard some very faint piano. Betsy was in her room and I assumed she was listening to France Culture on the radio and had neglected to close the door. I got up to remedy the situation and, in the course of taking steps in that direction, realized the piano sounds had moved behind me and were emanating from my speakers. One reviewer, I would later read, cites the source as a neighbor practicing. Maybe, but the spare, consonant, Feldman-esque notes, all but buried in the wash of room tones, would be almost too good to be true; I suspect deliberate insertion. That first listen, though, when all was mysterious, was spellbinding. And it remains so, beautifully balanced and integrated, the piano fading out of hearing from time to time, disappearing entirely for a good stretch, just barely poking its head in every so often. It's so faint I'm pretty sure that, sometimes, I'm just imagining it there.

The lone track retains its singular focus start to finish. On the one hand, I was reminded of an old favorite remark of Harry Partch re: one of his instruments, the Blo Boy: "It does exactly one thing but that one thing it does superbly". But there's more than one thing going on here, tons more. It's just funneled so smoothly and with such confidence that it reads as a solid entity but the complex wealth of details is always right there, described by those ghost notes from the keyboard. A stellar recording, really great, another fantastic recording from one of my favorite ensembles.