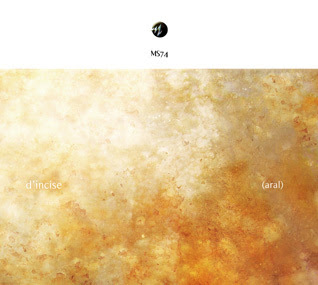 It's always tough (for me) to write about this area, what maybe you'd call the dark ambient side of field recording, apart from merely being descriptive of the sounds. d'incise does what he does very well, molding and weaving lines of sonics into a good, palpable mass, always heeding textural play, with various soft, low thrums wandering among patches of crystalline static, for example. Given a strong enough ear on the part of the creator, that is to say an ear more or less on my wavelength (!), it might be tough to go wrong. If I have reservations about it, it's along the same line as I have about graphics or photo enhancement programs: the results are appealing butI'm wary at the ease by which they're achieved. Dunno, maybe Protestant work ethic kicking in. Given all that, this works very well, the throb providing a subtle forward thrust for the first 15 minutes before giving way to a clear organ-like tone that levels matters, splays things out a bit under the windy swooshes--nice combination of vacancy and clarity. That works into my favorite portion of the disc, that staticky sounds acquiring welcoming irregularity of occurrence, sounding more "natural" (i.e., as though recorded from broken circuitry), the organ thinning out and ultimately disappearing into a haze. A bit further in, there's the slight surprise of a lovely piano chord that tolls away beneath the scrim, then some attractive clatter in the mid-distance and what sound like small tapping machines, which come into wonderful focus at the very end of the piece, when all the bass hums suddenly disappear.

Admittedly, this kind of music tends, after a while, to blend together in my memory--it's hard to isolate--but for listeners into the genre (whatever it might be called) will find much to enjoy here.