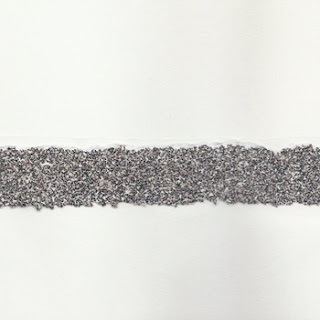 A fine, concentrated set of solo saxophonics from Branche. Can we use the term "post-Doneda" yet. It is probably an unfair singling out (doubtless there were other antecedents), but he was the first saxophonist I happened to hear, in the late 90s, where the idea of the instrument as a hollow tube of metal was thrust to the forefront. Branche focuses on a particular area in each of the five tracks, always deliberate even as the volume swells. The first ponders hollow key pops, a technique we've all heard before but, crucially, as is the case with all cuts, is embedded into a form that has its own life, sometimes almost suggesting a song. After the initial percussing, Branche interpolates a very low, circularly-breathed hum (I'm guessing tenor sax, though it's not indicated), creative a cavernous effect, the pops lodging into and rolling atop the thrum, the latter taking on a didjeridoo character. The next is also a multiphonic drone (as is much of the album), a mid-range, raw, quavering hum sandwiched between hoarse breath above and the occasional low intrusion. As throughout the disc, circular breathing is employed but, more importantly, really exquisite control with the overtones, wresting an endlessly fascinating series of sounds from an ostensibly narrow spectrum. Another, different, deep drone begins the third track, soon accompanied by insectile taps and scratches, like a thin dowel gently striking the saxophone exterior. The playing remains calm even as the volume increases steadily, reaching a point where the vibrations from the instrument are causing distortion in the mics attached, the whole contraption seemingly on the verge of dissolution. Again, great control and single-mindedness, wonderfully absorbing sound. After a lovely, quieter piece that features brushy noises with a strange ringing sound, Branche concludes with a return to the hyper-deep buzzes encountered earlier, even more intense and speaker-worrying, a very alive sound with more than enough tonal shading and gristle to allow intense aural inspection.

"Ligne irrégulière" is very well though out, strongly rendered album, great investigative feel, as though Branche is discovering these worlds as he goes. If you've any interest in saxophone extensions and think there's still life in that old beast yet, don't let this one escape.