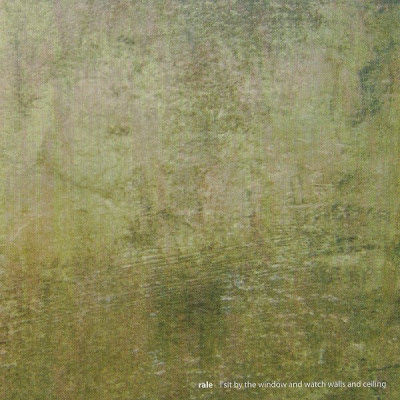 One of those interesting cases where it might be tough to essentially differentiate this music from much that has come out of the drone/noise scene except...this is really well done. Rale (William Hutson) offers seven tracks, culled from improvisations done between 2007 and 2011 and reassembled, that bleed together but vary, not unusually, from coursing dronage to full-fledged noise assaults, nothing very unfamiliar but very well constructed and paced, making the disc thoroughly enjoyable and somehow feeling fresh. Odd how that happens. The first section, wind-tones giving rise to hollow metallics, later adorned with radio captures and spatters is, on the one hand, something we've heard before but you just don't get any direct sense of a recurring event; it sounds new, the angle varied just enough to cast not only a different light but one with some importance, a slant previously missed. This is the case throughout, augmented by a subtle "narrative" structure with a couple of false endings and revivals. Not a dull moment to be heard, each section carrying something, several things of value. Good work. 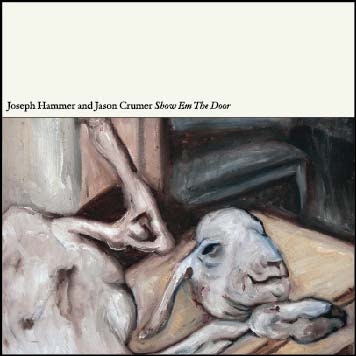 I've been duly chastised for not (as far as I can remember, which may not be very far) having been previously aware of Joseph Hammer's work. Situation rectified. I take it that, at least to some extent, he utilizes tape loops in various conditions with all sorts recorded material etched therein perhaps somewhat in a Lescalleetian manner, resulting in a slow pulse, iterated feel. That's certainly the case right from the beginning of this very fine recording, a collaboration with Crumer, who hails from the noise scene. My immediate point of reference upon hearing that first track, "Banner Drop" (one of four, all about 12-14 minutes in length) with it's repeated horn fanfare-like sound, was Ground-Zero's classic "Consume Red", not a bad starting point. I do get a feel of Otomo's 90s work in general here, that harsh noise/drone mix. "Guitar" is far crunchier, though the rapid-fire whizzes and bangs almost constitute a pebbly drone stream themselves, before settling into a very attractive and unexpectedly tranquil conclusion. The title cut begins as a noise-filled chugger, imploding impressively, before segueing into and odd, almost cello-like pattern, intricately rhythmic, reminding me, of all things, of Kevin Volans' work in the late 80s. "TB Blues" begins with a squeezebox melange with loose minimalist overtones, acquiring crumbs and dust as it rolls along before collapsing, with an audible cry of exhaustion.

Extremely enjoyable, well worth a listen. 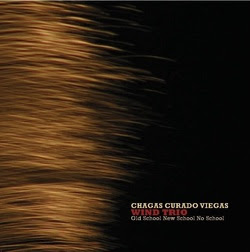 Eleven pieces, largely if not entirely improvise, by Viegas (soprano and bass clarinets), Chagas (flutes, oboe, sopranino clarinet) and Curado (flute, soprano and alto saxophones). the language is pitched somewhere between efi and the sort of post-Third Stream music initiated by the Davis/Newton/Wadud trio back when, iffy territory for these ears, though handled quite well here. That kind of loosely jazz-based, abstract lyricism is a rough go for me; I kind of feel the need to hear something on a Giuffre level, surely an unfair standard but one that nags. As ably as the instruments are played (and they are) and as lovely as the resultant textures have a tendency to become (and they often do), I can't help but think that a greater underlying melodic sensibility, however masked, would have helped. The trio dances around it but stays outside. For these ears, if you're not obliquely referencing the blues, as a similarly constituted Hemphill/Lake/Mitchell trio would have, it's not a bad idea to offer an acknowledgement of one's own tradition, or *a* tradition. Otherwise, as attractive as some of the pieces here are, there's an insubstantiality that's hard to brush aside. Not meaning to be overly critical--fans of this area of music will likely find much to enjoy here--I think it's a tough avenue to take nowadays. Creative Sources
Posted by Brian Olewnick at 1/01/2013 12:07:00 PM