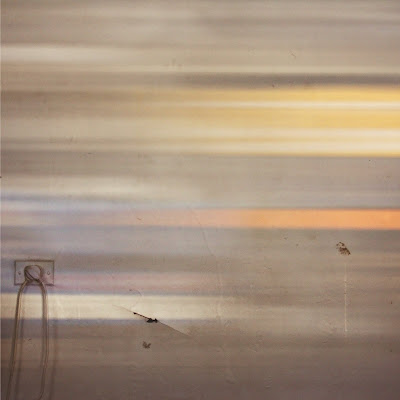 A charming and ingratiating LP out of Australia by McDougall, the first of his music I've heard, I believe. Four medium length tracks, each generally concerned with textures that combine the percussive and the softly electronic, bringing to mind, to an extent, the early work of Christopher Hobbs and the Gavin Bryars of "Hommages", but with an underlying tug and grit that's very current. "Platter Study #2", which leads of the album, illustrates this quite well, it's chiming tones, eddying slowly, filtered through mid-range, industrial hums and a strong crackle, among other strata. The density of detail is handled very well--it's not immediately apparent how much is going on until you focus on it and realize it's not three sounds but seven or eight. It's also very nicely "of a piece", doing it business, drawing in the listener, lasting precisely the 11'20" is should, then evaporating

"Untitled #4" is laden with field recordings, into which have been weaved a tolling keyboard note and what sound like flutes of some kind(aeolian?) but may well be something on the order of howler monkeys. Organ-like tones and strummed guitars enter eventually and this piece becomes somewhat pastoral, perhaps a bit too so, but managing to straddle the divide between groovily contemplative and bland. I pick up a bit more Bryars and perhaps even a bit of "Discreet Music"-era Eno in "Angklung Study (After Anne Boyd) #3", with wonderful deep tones flowing beneath muted, flitting piano figures and high, ringing bells. I take it that use is also made of an (angklung, a bamboo instrument, though I'm not sure. I have to say that the surface noise of the vinyl actually adds a welcome, sandy counterpoint here (!). It concludes with the bells having acquired an intriguing buzz, a nice bit of mystery there.

The final piece, "Installation Study #2", is my favorite, if only for it stripped-down character, acting as kind of a palate cleanser for the fine richness that has preceded. Hums, clicks and other slightly percussive ephemera come and go, soft bird and/or insect chirps linger. Again, as with the opening track, there's much more occurring tan might be apparent at first, but here, there's also a more expansive sense of air and atmosphere, pre-dawn air, cool and seemingly empty. When the somber, slightly sour piano chords enter, offset by some harsher but subtle electronics, the effect is fantastic. A real sense of beautiful place has been established, mysterious and alluring.