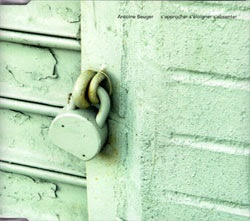 The score for this piece, written for three players (here, Barry Chabala, guitar; Dominic Lash, double bass; Ben Owen electronics), is 30 pages long, each page made up of an implied nine-square grid, three rows (one per player) of up to three actions per row. The number of "filled" spaces varies from two to nine. The spaces contain either "S", "D" or are blank. Beuger codes "S" as "a sound similar to a sound you are hearing/you heard (or played) before" and "D" as "a sound different from a sound you are hearing/you heard (or played) before". Sounds should be both "very quiet" and "not really short to very long". Players may enter freely and the number and sequence of score pages is up to the ensemble. As with much of his music, and that of the Wandelweiser composers generally, Beuger constructs a latticework upon which the musicians hang their sounds, the frame seemingly all but insubstantial yet, of course, imparting its structure and ideas to those sounds, ideally the composer and performer contributing equally.

This recording documents the opening concert at the two-week long AMPLIFY:stones festival that took place at The Stone in New York during the first half of September, 2011 and was also the sole event missed by yours truly due to a simultaneous book release party for a dear friend. A year ago today, as I type. I soon heard tell of the special excellence of this particular set so I'm quite glad to finally have been able to hear it and have little difficulty placing myself in the space, of imagining how the music would have gently filled that crowded room. Of course, what Beuger provides is the webbing; it's up to the performers to introduce the drops of dew, the struggling prey, the spider. I recall Rowe, at the Musique Action festival in Vandoeuvre in 2002 noting that, in his opinion, performances of Treatise were too often approached with excessive deference, as though the score wasn't robust enough to deal with some buffeting or even rudeness (hence John White's contributions that day). It seems to me that many of the scores I've seen from members of the Wandelweiser collective can contain similar perils, that low volume can too routinely conflate with excessive genteelness. The current trio negotiates that potentially sticky terrain extraordinarily well and, in doing so, make this an invigorating, altogether wonderful release.

My own (doubtless off) translation of the title might be, "one approaches, recedes, evanesces". Owen, when I've seen him perform, is especially adept at the latter, often contributing so subtly that it's only when he halts sound production completely that you realize he's been responsible for some superfine tinge or tickle. He's in that mode often here, though he notably "approaches" about midway through the 51 minutes, indeed playing something different, as a rapid, regular series of (relatively) loud clicks disrupts things in a welcome manner, welcome in the sense of acknowledging other sets of possible sounds, of voicing his freedom and bending the surrounding music to accommodate this, too. Chabala and Lash occasionally emerge distinctly as well with a ringing tone here, a deep, raspily bowed one there. But these moments are only of subsidiary import--the flow is the thing, the same but different wash that occupied the space there. It's as wondrous as it is difficult to describe, a kind of tension, of flexion that keeps the listener transfixed; I have to think it goes back to the unconscious appreciation that there is a structure there, a substrata gluing things together even as it's next to impossible to accurately discern, a structure as light and as possessed of tensile strength as that web.

It's hard to think of "s'approcher s'éloigner s'absenter" as anything but a whole, but I must mention an exquisitely gorgeous sequence just near the end, at about the 48 minute mark where Owen sets up a calm, regular rhythm, Chabala plays a rising arpeggio with a slightly plaintive twist at the end and Lash bows a rich, dark line--a thrilling moment in a great piece of work.

"My own (doubtless off) translation of the title might be, "one approaches, recedes, evanesces"."

It's fine, except that they're infinitives: "to approach,.." etc.