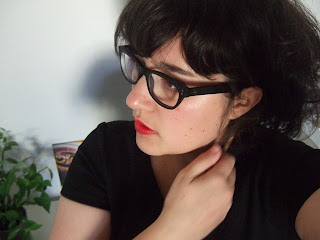 Recordings of installations can, of course, be problematic, some more than others. On this and the next one, we find one that manages to work superbly on it's own digitized feet and one that seems more incomplete.

Venrooy's "Vessels", which was installed in the Diapason Gallery, Brooklyn, in 2008, is sourced from the varied and often behemoth sounds of cargo ships on the river Waal in the Netherlands, enhanced here and there and overlaid in elastic, viscous patterns. If anything, it might recall some of Olivia Block's work with similar sounds ("Heave To") but Venrooy's sensibility is very much her own. The ultra-deep mix of hums, whirs and echoing bangs that begins the piece evolves into sloshing water and the low thrum of submerged engines. That thrum takes over, a wonderfully complex and rich sound, enveloping the space (I can imagine how this would have worked in situ!), eventually subsiding back into a set of ringing tones and distant aqueous clangs.

The recording runs only a half-hour, but it's time well spent and an impressive addition to Venrooy's already outstanding ouevre. 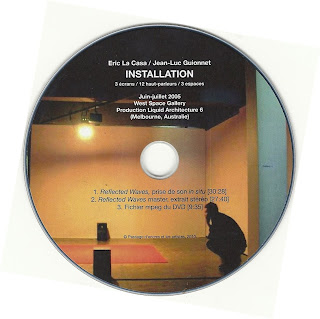 Another discafication of an installation, this one staged in Melbourne in 2005. To these ears, though not without its attractions, it suffers more than the Venrooy by being heard apart from its intended environment; one track here is apparently an unedited room sample, the other was perhaps constructed from various extracts. One gets a strong impression that the spatial character is a defining element, that having the organ chords stemming from one location or several, the voices from others, the bangs and clangs from still others would have a vastly different effect than hearing them issue from a pair of speakers. Putting oneself in the frame of mind to listen as though one was sharing the space helps and it's entirely possible to imagine walking through a gallery filled with these reflected waves. Given that, I don't find the installation quite as compelling as Venrooy's. The organ, presumably Guionnet, is quite nice, oozing through the space, enveloping disembodied voices and all else in its path. Those voices, especially when presented as cold excerpts enunciating single, apparently unrelated words, grow tiresome. Other found vocal tapes, such as a Chinese woman urging a sale of some two dollar item, a couple of pop song shards and a horde of demonstrating union workers chanting slogans, seem haphazard and non-illuminating. But saying all this, it seems, in this case, especially futile knowing how much I'm necessarily missing.

The disc lists a DVD mpeg some 9 1/2 minutes long, but I couldn't get it to play on any system--Region 2? The release also includes a very handsome, full-size booklet documenting (in French) the installation.

Brian, regarding Reflected waves, although its called a DVD file on the disc, its an mpeg file that will only play on a computer. Mpeg is a pretty universal format so I'd be surprised if your machine won't play it in one application or another.