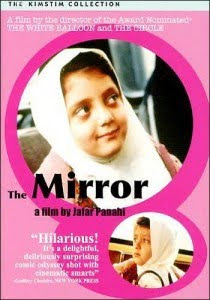 Been thinking about this movie for several days, Ayneh (The Mirror), directed by Jafar Panahi (1999). [Spoilers to follow, be forewarned]

It has an interesting structure, something about which caused me to relate it to ares of music I generally concern myself with here.

The movie begins with a simple enough premise: a seven-year old girl, one arm in a cast, leaves her school in Tehran one afternoon and her mother doesn't come by to pick her up. All her friends have gone home and the remaining school personnel are somewhat indifferent to her plight, eventually foisting her on a man with a scooter, who also seems relatively unconcerned with the young girl's actual safety. One of the clear subtexts in the film is the miserable way women are treated in Iran, their issues often dismissed out of hand if not derided. The girl wanders through the streets of Tehran, trying to get strangers to bring her home, a location of which she has only a vague idea. One of the fascinating aspects of the movie thus far is that it was shot on the streets of Tehran as is, cinema verité style so the viewer gets an excellent idea of the everyday activity taking place there, the massive amount of traffic through which she and others dangerously thread their way included.

Fine, all well and good. One is rather touched at her ordeal and the film is well-shot enough to maintain interest.

About 40 minutes in, the girl has secured a ride on a bus she has been told will head in the direction of her home. She's lodged herself near the driver but the front of the bus is reserved for men--women must huddle in the rear. There's something of an argument going on between the driver and the person who put her there when, all of a sudden, the young actress, Mina Mohammed Khani, breaks character and has something of a tantrum, declaring, "I don't want to act anymore!", removes her hijab and the fake cast on her arm and angrily leaves the bus, seating herself on the steps of a nearby store. A camera pans toward the back of the bus where we see the film crew in a dither, the director ordering a female adviser to talk with Mina, to try to convince her to continue. Several people try to no avail, mina continuing to change into her own clothes, in a total snit.

Panicked discussion ensues among the crew. One of them realizes, however, that Mina hasn't removed her mic an that they're still able to pick up transmission. Realizing she's in the middle of Tehran, far from her home, in essentially the exact same situation as her character (hence, "The Mirror"), they make the rather amazing (casual? callous? negligent?) decision to continue to film her from the bus. So they do, following her going from person to person, place to place, trying to get home.

It's a pretty amazing shift as the viewer goes from more or less caring about her character to seriously caring about the welfare of this little girl, wandering through traffic, engaging not always kind strangers, getting into cars, etc. (though she does so with determination and pluck).

But it was the act of being willing to change gears mid-film that made me think of some (possibly weak) connection to certain areas of music. Going from a scripted form, though loosely so and incorporating much improvisation, to an entirely freely improvised one where the structure is outside the control of the director and forms on its own. I guess more than anything, it was that willingness, even if it was more or less forced by circumstance, to go with something outside oneself, to surrender to happenstance with the knowledge that, maybe it'll lead to something even better than you'd planned (which it certainly does, in this case). Something akin, say, to Rowe's use of radio in AMM, to be willing to "disrupt" a perfectly fine performance with an intrusion of the unknown that may or may not be appropriate, that may cause the concert to crash and burn or not.

Maybe I'm reading too much into it but, whatever, it was a unique kind of viewing experience for me. (I'm almost counting on being told the dozens of times this trope has been used before....) Perhaps it has to do more with decisions made in real-time, a rare enough occurrence in a film that (unlike, say, Godard) didn't begin the day with that in mind as a possibility.

I love this movie too, and I appreciate your discussion of the metaphoric situation within the movie and it's possible relevance to improvised music. I think much of what you write is useful as a way to think about the similar situations of the film's story and improvisation, but I think you may be confusing the story of the Mirror with the reality of making the Mirror.

I don't know what else you may have seen of the particular arty strain of Iranian films that were distributed in the West during the 1980s & '90s, but Jafar Panahi, Mohsen Makhmalbaf & Abbas Kiarostami, among others, made many films during this period that played with the constructed nature of fictional films in pretty sophisticated ways.

I've seen the Mirror about 4-5 times, but I haven't seen it in about 3 years, so my sense of specific details probably isn't perfect, but consider what it looks like on the bus when the actress makes her decision to stop acting.

This isn't some kind of cinema verite moment. The entire back of the bus is filled with cameras, sound recording equipment, various members of the film crew etc. Yet earlier in the movie, when the girl is getting on that bus, she first considers sitting in the back with the women and then goes up near the driver so that she can talk with him about where she needs to go and whether he can help her get there. In these scenes, there are passengers throughout the bus, the back of the bus is not filled with gear and members of the film crew.

After the little girl keaves the film crew behind, she meets several of the people she had met in the first half of the film and has further conversations with them. There are a few things about these events that argue for the whole film being fictitious.

Going from the general to the specific, the first is that Tehran is a very big city, Wikipedia lists it as the 16th largest in the world with nearly 8 million people. How likely is it that the girl would again meet not just one, but several of the actors we've seen earlier in the film?

I've noted above that at the time of the girl's breakdown, the back of the bus was full of crew and gear. This makes it very unlikely that first half of the film was created in real time. How likely is it that actors the girl met in earlier scenes would be in the same neighborhoods they were filmed in on some other day if they weren't hired to be in that same neighborhood again?

While the girl apparently still has her body mic on, the audio for all of her interactions with other people are well recorded, not muffled as if the other speakers were being recorded only through the single mic she's still wearing. Again, how likely is it that this very limited recording tech would be adequate for the finished product we heasr in the movie?

I don't think any of this takes away from your argument, but what you saw in the Mirror was NOT improvised in the moment.

Thanks for the considered response!

You may well be correct--I can't find a definitive answer after a (brief) googling. Holden's review in the NYT kind of suggests there's at least a half and half (in the second half) aspect to the truth/fiction scenario.

I hadn't thought the first part was filmed in real-time (I may have given that impression) though I think lengthy segments may have been. There's discussion, when she quits, that they just want to get in one more scene that day, implying other days of filming.

I also had the idea that, when the quitting occurs, they weren't too far from the terminal. So encountering the old woman on the bench that she'd previously met on the bus didn't bother me. Were there others?

The mic cutting in and out also (perhaps artificially?) leaned me toward a documentary feel. I hadn't thought of the clarity of the sound--but what do I know about recording technology?

But, as I said, you may be totally correct or maybe it's a bit in between (she's still acting but everyone she encounters isn't?) Dunno! The girl's tantrum convinced me, but maybe I'm a sucker for that. ;-)

If it's a movie about a movie being filmed...I have to say, that makes it a little less interesting to me, a good bit more contrived. Probably screws up my improv analogy as well.

I saw this film soon after it came out, and after I had just visited iran. I think the film has a subtle political message, which is the only kind it could have. The little girl, to me, represents the iranian people, for whom the revolution (since 1979) has been directed like the script of a movie. When the little girl quits, it is like the iranian people saying that they don't want to act in this movie of islamic fundamentalism any more, and the have the courage to disobey. I'd be interested in whether iranians have similar reactions to mine. I am not iranian - I just visited there once. - Todd D.