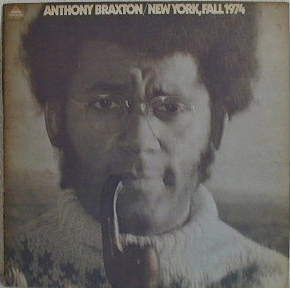 Found myself thinking about this album in a very different light the other evening. It had always been a big favorite of mine and holds up musically pretty well, but I was wondering....

Well, check out that wonderful Benno Friedman cover photo. It's almost just too perfect in some ways, especially in what it transmitted to a young, suburban would be avant white kid in 1975. You get to have your black cred but without any vestige of anger, without a sense of street or ghetto or class. Instead you have an intellectual looking black guy, smoking a curved pipe no less, wearing a thick winter sweater, rimless glasses, and sporting a bemused smile as though chuckling in surprise at some well-turned mot that you've just delivered. On the back, his ghostlike form is strolling through leaf-strewn woods, not the South Side of Chicago. This was likely the first image of Braxton seen by most listeners as the Arista recording was the first of his to be generally distributed. It's an affable one and I'm guessing went some way in making the music herein more palatable.

More, when you play the disc, you're far from the fire-breathing free-jazzer you may have expected to encounter, given his prior press and the reputation of the AACM generally. You're presented with extremely complicated and convoluted lines, ripped off with a precision you'd come to expect from King Crimson and spawn thereof. This isn't Coltrane, it's too clean for Mingus, it's not even Mitchell, lacking the delicious sourness and granularity. I can almost--almost--understand the charge of over-intellectualism leveled at Braxton at the time but it's exactly the kind of approach that could hook smart young fans weaned from prog and eager to investigate modern jazz. On the first side particularly, with the quartet of Wheeler, Holland and Cooper (incidentally, Cooper--along with Steve McCall--was always my ideal drummer for Braxton) things are wrapped up in a very complex bow, but a bow nonetheless. He gives you a lot to chew on but maybe lets you avoid rubbing up against the harsher realities implicitly proffered by the Cecil Taylors or Julius Hemphills of the world. I don't mean this as an aspersion on Braxton, just a partial explanation for why his music may have been chosen as the stuff to launch a semi-major label like Arista, that there was reason to expect that he'd "go down easy" with a significant portion of the market, guys like me. otoh, you could simply argue that he was the most interesting young jazz musician on the planet at the time. No reason not to combine both...

I find most of my pleasure today on Side One is derived from the heads, the intricate insistence of the first track (giddily, massively obsessive on the last run through), the charming additive nature of the second (23C, I think. I remember at the time it's not being obvious to me how it was constructed--hard to understand how I could've missed it--took me a while to figure it out. Since then, I've wondered if Rzewski was a direct source of the structure here, from pieces like "Attica") and the lovely, lazily romantic theme from track three with its unexpected and delightful sidetracks on the recapitulation. The improvisations between, however, come off as somewhat busy and/or routine. Not bad but unexceptional.

The three pieces on Side Two offer more to this listener these days. The duo with Teitelbaum is restrained and interesting throughout; I like it much more today than I did back when, probably simply due to understanding the language better. The first seeds of the World Saxophone Quartet appear in track two, another attack of obsessiveness appearing through much of it, though only marginally interesting to me now, more for the historic value. However, the last piece, with the quartet from Side One plus Leroy Jenkins, remains one of my single favorite works of Braxton's. The dark, dark theme is wonderful, played by the contrabass clarinet, Holland's arco and Jenkins, brooding like a large reptile disturbed from sleep. The improv is fine but set off brilliantly later on when Holland re-introduces the written material with some seriously deep, abyssal bowing accompanied by Cooper's crisp, spare cymbals. Very beautiful. I always wanted to hear AB investigate this area more often.

It was an important recording, putting the AACM on the general cultural map (though the AEC had made inroads on Atlantic previously). Practically speaking, it may have been the best possible choice to debut the label, though part of me wonders if we might not have been better served with, say, "Coon Bid'ness".

The follow-up record, "Five Pieces (1975)" was kinda more of the same, less solid with Altschul's busyness replacing Cooper's ultra-musical precision, a little treading of water until the Orchestra album which I'll get to sometime soon.
Posted by Brian Olewnick at 7/21/2007 08:55:00 AM

Jerome Cooper *is* great on this one; at first I assumed it was Altschul until a solo on side 1 sounded less frenetic than usual (not a total slam of BA; it's just that Cooper has existed too much on the sporadic fringes for whatever reason, although releases like Unpredictability of Predictability aren't going to appeal to a large audience or get frequent spins from those who like it, like me). It's also good to hear Holland in a quartet setting since his playing has been somewhat buried in recent releases, imo; not to mention less interesting. In fact side 1 sounds very Conference of the Birds-ish.

Listening to side 2 with more experienced (jaded?) ears was the nice surprise of this, although the sax quartet piece is kind of a period piece in terms of what's happened subsequently.

I get the impression that Cooper hasn't been the most reliable person to work with; a little spacey in other words, which may account for the surprisingly little amount he appears on recordings post Revolutionary Ensemble.

(I was at a friend's birthday party some 15 years ago and was startled to see Cooper there. Spent about an hour talking with him. Very nice person but, as I said, pretty spaced)

I do think his solo albums, "U of P "and "Root Assumptions" are the best such to have emerged from 70s jazz. His "Outer and Interactions" group recording from the late 80s is also very good.